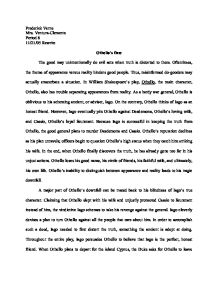 Frederick Verne Mrs. Ventura-Clements Period 8 11/21/05 Rewrite Othello's flaw The good may unintentionally do evil acts when truth is distorted to them. Oftentimes, the theme of appearance versus reality hinders good people. Thus, misinformed do-gooders may actually exacerbate a situation. In William Shakespeare's play, Othello, the main character, Othello, also has trouble separating appearances from reality. As a hardy war general, Othello is oblivious to his scheming ancient, or adviser, Iago. On the contrary, Othello thinks of Iago as an honest friend. However, Iago eventually pits Othello against Desdemona, Othello's loving wife, and Cassio, Othello's loyal lieutenant. Because Iago is successful in keeping the truth from Othello, the good general plans to murder Desdemona and Cassio. Othello's reputation declines as his plan unravels; officers begin to question Othello's high status when they catch him striking his wife. In the end, when Othello finally discovers the truth, he has already gone too far in his unjust actions. Othello loses his good name, his circle of friends, his faithful wife, and ultimately, his own life. Othello's inability to distinguish between appearance and reality leads to his tragic downfall. ...read more.

I am sure it was your wife's - did I today See Cassio wipe his beard with... If it be that, or any that was hers, It speaks against her with the other proofs"(III, iii, 450-456). In this conversation, Iago's claim almost seems to be ridiculous. Iago states that because he saw Cassio wipe his beard with a handkerchief that Othello gave to Desdemona, Cassio and Desdemona must be having an affair. More disturbing is that Othello believes Iago's lie. Although Othello never saw Desdemona cheat on him, nor did he see Cassio with such a handkerchief, Othello immediately takes Iago's fabricated story as truth. Envisioned as a sweet and innocent lover, Desdemona's image is shattered by Iago's trickery, thus preventing Othello from seeing Desdemona's true self. Once a part Iago's fake world, Othello thinks Desdemona is cheating on him. When Iago forces Othello to jump to conclusions about his wife by concocting lies Othello curses Desdemona stating, "d**n her, lewd minx! O, d**n her, d**n her! I will withdraw To furnish me with some swift means of death For the fair devil"(III, iii, 491-494). Othello refers to her as a lewd minx, demonstrating his thoughts about her cheating on him. ...read more.

Although Othello has no logical reason to mark Cassio as an enemy, Iago's deception leads Othello astray. Since Othello cannot identify for himself his true friends and enemies, Othello loses a dear friend when he dismisses Cassio from his mind. Because Othello cannot see through fake appearances, he suffers a major tragedy. Although Iago makes Othello's friend and wife appear to be enemies, it is really Othello's incapability to distinguish between appearances and reality that cause him to suffer. Othello loses the love of his life, Desdemona, a devoted servant, Cassio, and his reputation as a hero. Othello eventually kills Desdemona and sends Iago to murder Cassio. After realizing his error in judgment, Othello laments his losses and commits suicide. This downfall, orchestrated by Iago, could have all been prevented if Othello had been able toe distinguish reality from appearances. Unfortunately, Othello was not able to identify his true friends and his enemies which caused the good general to do evil things. Shakespeare's Othello proves how important trust and love are in a relationship. Real trust and love are needed in order for a relationship to grow. False loving qualities that only appear to be real will never be able to substitute for real feelings. With a strong bond of love and trust, deception and lies can be avoided. ...read more.