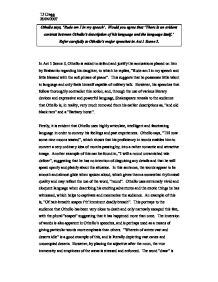 Othello says, 'Rude am I in my speech'. Would you agree that 'There is an evident contrast between Othello's description of his language and the language itself.' Refer carefully to Othello's major speeches in Act 1 Scene 3.

Othello says, 'Rude am I in my speech'. Would you agree that 'There is an evident contrast between Othello's description of his language and the language itself.' Refer carefully to Othello's major speeches in Act 1 Scene 3. In Act 1 Scene 3, Othello is asked to defend and justify the accusations placed on him by Brabantio regarding his daughter, to which he replies, "Rude am I in my speech and little blessed with the soft phrase of peace". This suggests that he possesses little talent in language and only feels himself capable of military talk. However, his speeches that follow thoroughly contradict this notion, and, through the use of various literary devices and expressive and powerful language, Shakespeare reveals to the audience that Othello is, in reality, very much removed from his earlier descriptions as, "and old black ram" and a "Barbary horse". Firstly, it is evident that Othello uses highly articulate, intelligent and fascinating language in order to convey his feelings and past experiences. Othello says, "Till now some nine moons wasted", which shows that his proficiency in words enables him to convert a very ordinary idea of months passing by, into a rather romantic and attractive image. ...read more.

"She swore, in faith 'twas strange, 'twas passing strange, 'Twas pitiful, 'twas wondrous pitiful;" Here, Othello seems to be echoing what Desdemona said to him after he had finished his tale, which shows how truly amazed and astounded she was by it. The repetition of the words "strange" and "pitiful" also highlight her astonishment. In the final lines of Othello's speech about his life adventures, he sums up how the relationship began between Desdemona and himself. "She loved me for the dangers I had passed, And I loved her, that she did pity them. This only is the witchcraft I have used." These concluding lines are beautifully balanced and certainly reflect the expertise of the speech maker, with the repetition of "loved" showing the couple's mutual affection for each other and the fact that no such witchcraft was used, contrary to previous allegations. Aside from the wonderful language that Othello uses in this scene, there are also countless literary devices that help to really bring the language alive. Firstly, Othello uses alliteration, which is a useful device as it generally alerts the audience and puts greater emphasis on the words used. ...read more.

A good metaphor used in Othello's speech is, "Rough quarries, rocks, and hills whose heads touch heaven". The hills did obviously not touch heaven, but Othello has used this image skilfully to illustrate just how tall they really were and call attention to the vast variety of landscape in his former homeland. Lastly, there is evidence of irony in one of Othello's speeches, when he is talking of the alleged witchcraft and drugs he has used in his wooing of Desdemona. "...what drugs, what charms, What conjuration and what mighty magic" Othello deliberately says this to alarm others and trick them into thinking that he has actually used potions and magic in order to gain Desdemona's affection; only to later destroy these thoughts by telling them the innocent truth. Irony is a very intelligent literary device, which confirms Othello's eloquence in language. In conclusion, it is apparent that Othello's initial description of his language vastly contradicts what is subsequently displayed to the audience. His words are well-crafted, expressive and articulate. Furthermore, numerous literary devices are used in order to intensify the already beautiful language and communicate events and images in a way that captivates the audience and manipulates our opinion of him. TJ Cragg 28/04/2007 ...read more.