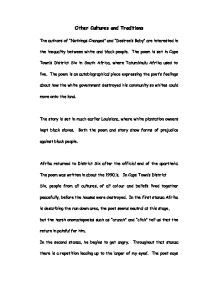 Other Cultures and Traditions

Other Cultures and Traditions The authors of "Nothings Changed" and "Desiree's Baby" are interested in the inequality between white and black people. The poem is set in Cape Town's District Six in South Africa, where Tatumkhulu Afrika used to live. The poem is an autobiographical piece expressing the poet's feelings about how the white government destroyed his community so whites could move onto the land. The story is set in much earlier Louisiana, where white plantation owners kept black slaves. Both the poem and story show forms of prejudice against black people. Afrika returned to District Six after the official end of the apartheid. The poem was written in about the 1990.'s. In Cape Town's District Six, people from all cultures, of all colour and beliefs lived together peacefully, before the houses were destroyed. In the first stanza Afrika is describing the run down area, the poet seems neutral at this stage, but the harsh onomatopoeias such as "crunch" and "click" tell us that the return in painful for him. ...read more.

At this point the writers anger is flaring like the flag above the whites only inn. He is powerless, his feelings get stronger and it seems as if he is coming close to breaking point. The reason why Tatumkhulu Afrika uses the term "Nothing's changed" is that since apartheid the blacks have been treated badly. The area has been completely destroyed and on Afrika's return to District Six things do not seem to have changed. The poem is structured into two halves, separated by two lines at the end of stanza four. This reflects the separation of the blacks from the whites. The story recounts the sudden marriage of Desiree, who has a mysterious past and Armand is a slave owner. When their baby is born, Armand is angry because he blames Desiree for the fact that the baby is of a mixed race. Armand has black slaves working for him on his plantation. In the six paragraph of the story we are told how Armand treats his black workers. ...read more.

The story's structure covers a long period of time than the poem, and develops relationships between the characters. The author gives us clues in the language to prepare us for the twist at the end. For example, when the writer describes L'Abri, where Armand lives, she uses similes like "black like cowl" and phrases such as "far-reaching branches shadowed it like a pall." The writer uses dark colours to describe Armand, as he is black and light colours to describe Desiree, as she is white. I think that the author of the story wants us to feel that Armand has got his punishment. Armand was very prejudice and against black people, but has to face up to the fact that his mother was a slave. I think that as Armand despises all black people, he despises himself as well. In conclusion, both the story and the poem may have been set in different countries and at different times. But both show how white people feel superior to black people. Both texts use different techniques to show how white people use their power to deprive black people of the rights and freedom. ...read more.