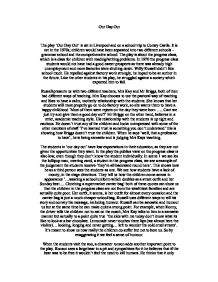 Our Day Out The play 'Our Day Out' is set in Liverpool and on a school trip to Conwy Castle. It is set in the 1970s; children would have been separated into two different schools - grammar school and the comprehensive school. The play is about the progress class, which is a class for children with reading/writing problems. In 1970 the progress class students would not have had a good career prospects as there was already high unemployment and more factories were shutting down. Willy Russell didn't like school much. He repelled against factory work strongly, he hoped to be an author in the future. Like the other students in his play, he struggled against a society which expected him to fail. Russell presents us with two different teachers, Mrs Kay and Mr Briggs, both of then had different ways of teaching. Mrs Kay chooses to use the pastoral way of teaching and likes to have a calm, motherly relationship with the students. She knows that her students will most properly go on to do factory work, so she wants them to have a happy childhood 'Most of them were rejects on the day they were born ..... ...read more.

For example, when Ronny, the driver tells the children not to eat on the coach, Mrs Kay talks to him in a sarcastic manner but actually to a point quite true 'the kids with me today don't know what its like to look at a bar chocolate. Lemonade never touches there lips (we almost here the violins)... looking, longing and never getting... left to wonder the cold cruel streets'. It's meant to show us how really the children do suffer but not to bore us. So by exaggerating it we feel a sense of humour. When the students visit the zoo, a character ronson adds another important point to the play. Ronson sees a large bear in a pit and sympathises for it he believes that if the bear was to be free it wouldn't feel the need to kill humans. He thinks that it only wants to kill humans because humans have locked it up 'it must no other ways of living... Free... people have stopped it living. It only kills cos it's trapped. If it were free it wouldn't bother people at all' if you change the story round it would fit into the life of the characters, ronson must feel that even though his life is restricted he does know what he is missing out on in life. ...read more.

'It's only the docks replies Reilly. This shows how different status appreciates things differently. Russell also uses the attitudes of the characters to show the views from the public. In scene 19 we see how a caf� owner reacts when the coach approaches them 'the shutters are coming down, the coaches welcome sign is replaced be 'absolutely no coaches' and the open sign by one saying closed. The doors are locked and bolted' this is to show that the public automatically think badly of them. The play ends simply by arriving back in Liverpool. As the play progressed we saw how some of the characters changed their attitudes, for example at the start Reilly was disrespect full to girls- wolf whistling and at the end he is a considerate boyfriend. Briggs character changes extremely form strict, spoil sport to a let lose have a laugh teacher. He sees the children differently now even though he will always be strict at school. We see both academic and pastoral teaching; one without the other is too much students need a variety so it is balanced. The issue of education shouldn't be treated in a humorous way because it serious however you could argue by creating an amusing screenplay Russell gets his message across to the audience. By Leah Coope 10P ...read more.