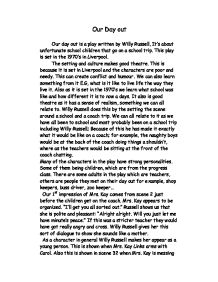 Our Day out Our day out is a play written by Willy Russell, It's about unfortunate school children that go on a school trip. This play is set in the 1970's in Liverpool. The setting and culture makes good theatre. This is because it is set in Liverpool and the characters are poor and needy. This can create conflict and humour. We can also learn something from it E.G, what is it like to live life the way they live it. Also as it is set in the 1970's we learn what school was like and how different it is to now a days. It also is good theatre as it has a sense of realism, something we can all relate to. Willy Russell does this by the setting the scene around a school and a coach trip. We can all relate to it as we have all been to school and most probably been on a school trip including Willy Russell; Because of this he has made it exactly what it would be like on a coach; for example, the naughty boys would be at the back of the coach doing things a shouldn't, where as the teachers would be sitting at the front of the coach chatting. Many of the characters in the play have strong personalities. ...read more.

The reason the zoo scene is effective is because of the way Willy Russell has written it; as if it is a split screen. This is mainly shown because it was created for T.V. The split screen is between the caf� and the zoo. This is effective on its own as it creates a sense o pace and holds the interest of the audience's attention. In the children's zoo it starts off with the children picking up the animals and stocking them. At one point carol tries to stroke the animal Ronson picked up. This shows that the children are insecure. In the next scene it is between Mr. Briggs and Mrs. Kay. In this scene Mrs. Kay asks Mr. Briggs to call her by her first name. This shows that they are becoming friends and building a relationship. After the next scene where all the children are clutching fury friends and calling them names. Mr. Briggs soft gentle side to him is coming out this is shown by the way he sees something good in the children. "They're really interested, you know, really interested in the animals." He goes onto say that he might set up extra classes for the children. This scene also contains humor as for the first time Mr. ...read more.

The language of the play makes it particularly good drama. Willy Russell uses a lot of realism in his dialogue. I am going to use the beach Scene (scene 32). An example of this is when Jimmy says: "Ey Miss, we could have brought our costumes an gone swimmen." Willy Russell uses abbreviations to show how the children have accents (Liverpool) and they're educationally deprived. This is shown when they use slang; Jimmy says "undies" instead of underpants. When the teachers talk they sound in contrast from the children. Mrs Kay says: "Look, the reason I don't want you to go swimming is because there aren't enough staff here to guarantee that it would be safe. I want to go home with a full coach load thank you. This is different from the children because her language is formal, never slang or abbreviated. Willy Russell does this to make us stop and think. An example of this is in the coach scene when Digga says: "She's always with the blacks off the boats, your ma. And they're loaded, them blacks are. Digga uses the word "Blacks". Nowadays using it in this sense sounds inappropriate and wrong. But Willy Russell is showing that people in these times were na�ve and ignorant about ethnic culture. The reason this is effective and makes good theatre is because it makes us stop and think about how much society has changed. ...read more.