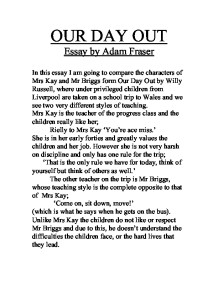 OUR DAY OUT Essay by Adam Fraser In this essay I am going to compare the characters of Mrs Kay and Mr Briggs form Our Day Out by Willy Russell, where under privileged children from Liverpool are taken on a school trip to Wales and we see two very different styles of teaching. Mrs Kay is the teacher of the progress class and the children really like her; Rielly to Mrs Kay 'You're ace miss.' She is in her early forties and greatly values the children and her job. However she is not very harsh on discipline and only has one rule for the trip; 'That is the only rule we have for today, think of yourself but think of others as well.' The other teacher on the trip is Mr Briggs, whose teaching style is the complete opposite to that of Mrs Kay; 'Come on, sit down, move!' ...read more.

For example after the visit to the zoo where he finds out that the children have stolen some of the animals; 'You act like animals, animals!...I've learned that trust is something you people do not understand.' Mrs Kay is right to trust the children because she knows that they are good people that can just get a bit out of control sometimes. But in the end Mr Briggs is proven right not to trust them when they go completely out of control at the zoo and steal a lot of animals. Mrs Kay's opinion on the point of the trip to Wales is that she wants the children to have some fun; Mrs Kay to Mr Briggs 'I'm not going to let you prevent the kids from having some fun.' Mr Briggs however sees the point of school trips as a chance for more learning in an organised and strict manor; Mr Briggs to Mrs Kay 'But I thought the trip was organised so that the children could see Conwy Castle.' ...read more.

they have no future; 'There's nothing for them to do, any of them, most of them were born factory fodder but now the factories have closed down.' But Mr Briggs thinks they should try to educate them and not be their friend when he says to Mrs Kay; 'I think you have to risk being disliked if you're going to do any good for these type of kids.' I agree with Mr Briggs on this subject. I believe all children should have the chance to be educated. However I do not think you have to dislike the children to educate them. I prefer the character of Mrs Kay to that of Mr Briggs because she is a much more laid back, kind person. However I think Mr Briggs would be a better teacher for the progress class because the children would benefit from a stricter teacher who could see the point in teaching them and teach them some discipline. ...read more.