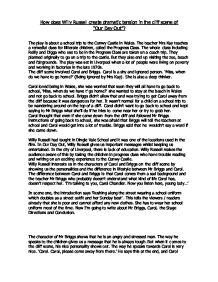 How does Willy Russell create dramatic tension in the cliff scene of "Our Day Out"? The play is about a school trip to the Conwy Castle in Wales. The teacher Mrs Kay teaches a remedial class for illiterate children, called the Progress Class. The whole class including Reilly and Digga who use to be in the Progress Class are taken on a coach trip. They planned originally to go on a trip to the castle. But they also end up visiting the zoo, beach and fairgrounds. The play was set in Liverpool when a lot of people were living on poverty and working in factories in the late 1970s. The cliff scene involved Carol and Briggs. Carol is a shy and ignored person. 'Miss, when do we have to go home?' (Being ignored by Mrs Kay). She is also a deep thinker. Carol loved being in Wales, she was worried that soon they will all have to go back to school, 'Miss, when do we have t' go home?' she wanted to stay at the beach in Wales and not go back to school. Briggs didn't allow that and was trying to get Carol away from the cliff because it was dangerous for her. It wasn't normal for a child on a school trip to be wandering around on the top of a cliff. ...read more.

'Carol. Carol, please come away from there.' He says this at the end, and Carol responds and gives Mr Briggs a compliment 'Sir, you should smile more often, y' look great when y' smile.' The tone of Brigg's voice throughout the play is mean. The only time his tone of voice is soft, is when he wants someone to do something for him e.g. get Carol down from the cliff. 'Come on, Carol.' At first he is being very tough on the children, 'Now listen here young lady - I don't like your attitude one but!' Once he gets to know the children better, he becomes kinder. 'It's all right ... we'll get round them all eventually.' At the start of the play, the way Briggs speaks to the children is horrible, e.g. Briggs speaking with Reilly. 'Sit down, now, come on, move!' After the cliff scene, when Carol came down to the coach with Mr Briggs, you can see that he has changed his attitude from a grumpy old man, to a good hearted man. If you take a look after the cliff scene, Mr Briggs doesn't raise his voice at the children anymore. Mr Briggs protected Carol from getting into trouble by Mrs Kay. 'Mrs Kay, I've found her. Now will you just let me deal with this.' ...read more.

But it wasn't like that; they talked on the cliff for several minutes, and the moment Briggs came nearer to Carol, she kept threatening Mr Briggs that she'll move nearer and nearer to the end of the cliff and jump off. Briggs became softer to Carol at the end, and Carol decided to come down. Willy Russell has created tension in the cliff scene by making everyone aware of where Carol is. And having Briggs go look for her. The audience would be amazed by looking at the way Carol speaks to a teacher in a bright atmosphere (Up on the cliff). The argument they both had was dramatic and exciting for the audience. It looked like Mr Briggs didn't stand a chance against Carol because of all the strong and affecting sentences Carol has said, 'Don't you come near me!' You can see how strong this sentence is and the way she had said it looked like it affected Mr Briggs by a lot. During the cliff scene when Carol and Briggs argue, the audience will feel amazed by how Carol acts towards Briggs as he is a teacher. Carol always pressured Mr Briggs by saying that she'll jump over if he came nearer to her. 'Try an' get me an' I'll jump over.' But for Briggs he's always mad and shouting. During the conversation, Brigg's temper rises every moment but it becomes softer at the end. ...read more.