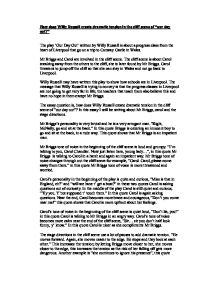 How does Willy Russell create dramatic tension in the cliff scene of "our day out?" The play 'Our Day Out' written by Willy Russell is about a progress class from the heart of Liverpool that go on a trip to Conway Castle in Wales. Mr Briggs and Carol are involved in the cliff scene. The cliff scene is about Carol sneaking away from the others to the cliff, she is later found by Mr Briggs. Carol threatens to jump off the cliff so that she can stay in Wales and not go back to Liverpool. Willy Russell may have written this play to show how schools are in Liverpool. The message that Willy Russell is trying to convey is that the progress classes in Liverpool are not going to get very far in life; the teachers that teach them also believe this and have no hope in them except Mr Briggs. ...read more.

"I'm talking to you, Carol Chandler. Now just listen here, young lady...", in this quote Mr Briggs is talking to Carol in a harsh and again an impatient way. Mr Briggs tone of voice changes through out the cliff scene for example, "Carol. Carol, please come away from there." in this quote Mr Briggs tone of voice is more threatened and worried. Carol's personality in the beginning of the play is quite and curious, "Miss is that in England, eh?" and "will we have t' get a boat?" in these two quotes Carol is asking questions out of curiosity. In the middle of the play Carol is still quiet and curious, "'Ey you. ...read more.

Another example is "she continues to ignore his presence", this quote shows that she has turned against Briggs by ignoring him, she might do something stupid. I think that Willy Russell has created tension in the cliff scene by making Carol and Briggs change their personalities to the opposite of what was expected. Their tone of voice has also change for example, Carol getting rude to Mr Briggs. Mr Briggs using a sensible, calm tone to persuade Carol to get away from the edge. With the stage directions, he has managed to use according to their personalities, "She continues to ignore his presence" this tells the audience that she has turned against Briggs by not listening to him and refuse to go back to the rest of the group. ...read more.