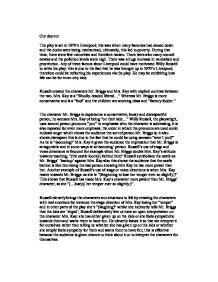 Our day out by Willy Russell

Our day out The play is set in 1970's Liverpool; this was when many factories had closed down and the docks were being mechanised, ultimately, this led to poverty. During that time, there were few minorities and therefore racism. There were also many council estates and the pollution levels were high. There was a huge increase in vandalism and prostitution. Any of these factors about Liverpool could have motivated Willy Russell to write the play: this is due to the fact that he was brought up in 1970's Liverpool; therefore could be reflecting his experiences via the play. He may be exhibiting how life can be for inner-city kids. Russell created the characters Mr. Briggs and Mrs. Kay with explicit contrast between the two. Mrs. Kay is a "Woolly-headed liberal..." Whereas Mr. Briggs is more conservative and is a "fool" and the children are working class and "factory fodder." The character Mr. Briggs is depicted as a conservative, bossy and disrespectful person, he accuses Mrs. Kay of being "on their side..." ...read more.

or whether she simply feels sympathy for them and wants them to have fun; this is effective because the audience is given chance to think about it or to interpret the characters for themselves. The character Mrs. Kay is portrayed as a "liberal..." person and Mr. Briggs thinks her "liberalism..." doesn't do "...the kids a scrap of good." Her educational philosophy conflicts with Mr. Briggs' educational philosophy. Although Mrs. Kay shows the children "...love and kindness..." She has 'given up' on them and classes them as "...factory fodder." This shows the audience the bitter side of Mrs. Kay; she can also be assertive, she tells Mr. Briggs to "...listen," and to "...stop fooling..." himself. The audience, initially, feel that she is sympathetic towards the children, as she is like a "...mother hen rather than a teacher..." This shows that she has sympathy for the children, on the other hand some of the audience may feel she is 'slack' or has given up on them and believes that they' re lacking love for example Andrews (one of the children) is "belted" by his "dad" "because [he] won't give him..." a cigarette. ...read more.

to go and visit "the zoo" even though they're on an educational visit. This causes conflict between the two teachers and forms the basis of dramatic tension in the play as the audience are left to interpret the characters in many different ways therefore cannot predict what, exactly, is going to happen later on in the play. Some of the audience may feel that there is going to be a major physical or verbal conflict involving the two teachers; whereas others may feel that the two teachers are going to 'make up' and settle it with peace. Mr. Briggs can be classified as a stubborn, self-centered or strict person; although he does show some sort of concern towards educating the children. We, as the audience, are also shown a less-disrespectful or 'nicer' side of Mr. Briggs, as he "...wraps his arms around..." Carol-he practically saves her life when she is about to fall off the cliff, he "...grabs out quickly and manages to pull her to him." To some audiences this can be classed as self-preservative however it may also show the 'loving' side of Mr. Briggs. The play may be portraying the working-class background of Russell. ...read more.