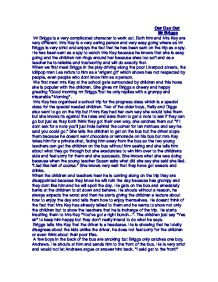 Our Day Out - character study of Mr Briggs

Our Day Out Mr Briggs Mr Briggs is a very complicated character to work out. Both him and Mrs Kay are very different. Mrs Kay is a very caring person and very easy going where as Mr Briggs is very strict and enjoys the fact that he has been sent on the trip as a spy. He has been sent as a spy to watch Mrs Kay because he knows that she is easy going and the children run rings around her because shes too soft and as a teacher he is reliable and trustworthy and will do exactly that. When we first meet Briggs in the play driving along the poor Liverpool streets, the lollipop man Les refurs to him as a 'arigant git' which shows hes not respected by people, even people who dont know him as a person. We first meet mrs Kay at the school gate surrounded by children and this hows she is popular with the children. She gives mr Briggs a cheery and happy greeting "Good morning mr Briggs."but he only replies with a grumpy and misarable "Morning". Mrs Kay has organised a school trip for the progress class which is a special class for the special needed children. Two of the older boys, Reily and Digga also want to go on the trip but if mrs Kay had her own way she would take them but she knows its against the rules and asks them to get a note to ask if they can go but just as they both think they got their own way, she catches them out "If i dont ask for a note you'll just hide behind the corner for ten mintues and say he said you could go." She tells the children to get on the bus but the driver stops them because he doesnt want chocolate or lemonade on his bus but mrs Kay takes him for a private chat, facing him away from the bus so the two young ...read more.

"Oh Mr Briggs" she says sarcasticaly "oh would you?" She knows he is keen to help. this is good for him and the children. For the first time in the play hes happy and relaxed and raring to go and the children are on the coach. Briggs "All checked and present off we go." This is the first time he hasnt shouted at them. This is irony because now he trusts the children for the first time, they have done wrong but when he was shotuing at them, they had done nothing wrong. The zoo keepers catch up to the bus and get on the bus, Briggs is at first angry with them because they take over the coach and critasize the teachers and children. Briggs would normally do that. He defends the kids for the first time and himself. However when he realises that they have stolen the animals, he appoligises to the keepers and takes them outside of the coach so no one can see him suck up to them. Its to keep his strict image. When he gets back on the coach he is furious. "I trusted you lot. I trusted you. all of you and this is how u repay me." He says they have let him down and that they cant be trusted. "The minute we start to treat you like real people..." He calls them animals "That man was right, you act liek animals, animals!" He says "people like you" as if they are different. He is mostly mad because he is made to look incompetant and made to look really stupid. The coach arrives at the castle and Briggs is back to his happy mood. Hes calmed down and he is determained to keep them in control this time so he takes a group of children around with him and teaches them to keep them behaved and occupied. ...read more.

At the fair ground, we see everyone together and everyone happy even Briggs. "On the waltzer the kids, including mr briggs and carol together in a car." Most of the time we see briggs with carol making sure she is ahppy but also clearly, enjoying himself. Beck on the coach everyone exsaucedid but happy. Briggs realy stands out stil wearing the cowboy hat which he either bought or won. All the children thank briggs "Sir thanks sir.. that was ace sir." where as usually they woudl thank Mrs Kay. The fair has been the success of the day and its all thanks to him. They will forget him being horrible and innocently they ask him can they go back tomorrow. On the coach everyone is singing on the way home and no suprise carol is sitting with Mrs Kay but it is a suprise that briggs is sitting at the back relaxed not to watch the children behave. Briggs comes down to the front of the coach to see Mrs Kay. He seems disappointed that the day is over, when at the start he didnt want to be there. Hes obviously found another side to himself so it wasnt only the children who was suprised to see this other side. He is suprised to hear taht Mrs Kay has taken pictures of him. He offers to develope them but it seems to be the new Briggs making a nice gesture but readers will guess what hes going to do. The last scene he wishes everyone goodnight but when Reily says "Enjoyed yourself today didnt you sir?" Briggs replies "Pardon?" Then he tells Linda about her uniform but he doesnt tell her off and this is when we realise he is back to the teacher 'Briggs' To our disappointment but not suprised we see him standing symbolicly with the school behind him so this shows he is back to reality and shows his career is important to him and so he crumples and distroys the evidence on the camera film. ...read more.