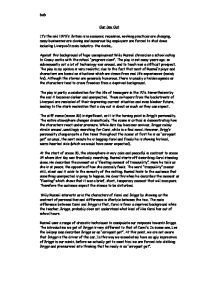 Our day out. The cliff scene (scene 35) is significant, as it is the turning point in Briggs personality. The entire atmosphere changes dramatically.

Our Day Out It's the mid 1970's: Britain is in economic recession, working practices are changing, many businesses are closing and numerous big employers are forced to shut down- including Liverpool's main industry- the docks... Against this background of huge unemployment Willy Russell chronicles a school outing to Conwy castle with the school "progress class". The play is set many years ago; so subsequently not a lot of technology was around, and to teach was a difficult prospect. The play in my opinion is very realistic; due to the fact that most of Russell's plays and characters are based on situations which are drawn from real life experiences (mainly his). Although the stories are generally humorous, there is usually a hidden agenda as the characters tend to crave freedom from a deprived background. The play is partly a celebration for the life of teenagers in the 70's. Nevertheless by the end it becomes darker and unexpected. These no-hopers from the backstreets of Liverpool are reminded of their depressing current situation and even bleaker future, leading to the stark realisation that a day out is about as much as they can expect. The cliff scene (scene 35) is significant, as it is the turning point in Brigg's personality. The entire atmosphere changes dramatically. The scene is critical in demonstrating how the characters react under pressure. ...read more.

Carol rudely replies" no-one" as she tries to gain control over him. Overall, this adds to the dramatic tension and rivalry created. The main themes in the play are power, Child-adult relations, deprivation and authority; the themes are demonstrated in numerous ways e.g. in scene 35 Carol challenges Briggs authority and he is powerless to stop her. She says she wants to "stay here, where it's nice". Here Russell uses dramatic irony, the audience know that Carol cannot stay in Wales but Carol does not know this. Furthermore, as she describes the place as "nice", we get the feeling that she has never visited a place like this before (probably because her family could not afford to) and that she thinks it is better than Liverpool. Therefore, the audience have a compulsion to feel compassion for Carol and to pity her, especially an audience of this era, as we are the ones who would have less of an idea of what it's like to be in a situation like that of Carol's. Carol's threatened suicide produces the climax of the day and almost brings out a change in Briggs' attitude. On screen, Carol's character is played as tense and disturbed which unsettles the audience as they start to worry about what will happen. The setting of the cliff-tops with the sea "breaking on rocks" below adds to the danger created. ...read more.

This is very uncharacteristic for Briggs. We are shown how caring and fatherly he can be and we are glad that there is a good outcome. Our day out is generally perceived as a social commentary, either to display the depressing past or as a message of hope, to give foresight into a future of possibilities. It also warns us about what can happen if we don't pay attention to our surroundings. In a way, it represents how history can repeat itself, for example the recession the world is in now and the recession in the 70's. It gives us an idea of what we can expect if we don't look after our money and savings and if we don't get a good job. The play fits its context as a typical "play for today". "Play for today" demonstrated "single-drama's" potential to engage "mass audiences" with "artistic experimentation". The play has a desire to provoke the middle-class out of their "supposed complacency" and it does this well. The play is a deeply personal real-life story (Russell's life) dramatised in many ways. The plays explored "social and political issues". Our day out created much discussion about the value of educating "no-hopers". Woven into the struggle of life are a number of other story lines; each of which displays many hidden messages. The character Briggs softens after a cliff-top confrontation with Carol. How he will behave after the outing is just one of the many questions posed by Russell's play: questions which stimulate much debate. ...read more.