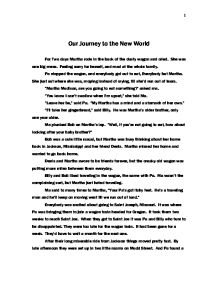 Our Journey to the New World.

Our Journey to the New World For Two days Martha rode in the back of the dusty wagon and cried. She was one big mess. Feeling sorry for herself, and mad at the whole family. Pa stopped the wagon, and everybody got out to eat, Everybody but Martha. She just sat where she was, moping instead of crying, till she'd run out of tears. "Martha Madison, are you going to eat something?' asked ma. "You know I can't swallow when I'm upset," she told Ma. "Leave her be," said Pa. "My Martha has a mind and a stomach of her own." "I'll take her gingerbread," said Billy. He was Martha's older brother, only one year older. Ma plunked Bob on Martha's lap. "Well, if you're not going to eat, how about looking after your baby brother?" Bob was a cute little rascal, but Martha was busy thinking about her home back in Jackson, Mississippi and her friend Denis. Martha missed her home and wanted to go back home. Denis and Martha swore to be friends forever, but the creaky old wagon was putting more miles between them everyday. Billy and Bob liked traveling in the wagon, the same with Pa. Ma wasn't the complaining sort, but Martha just hated traveling. Ma said to many times to Martha, "Your Pa's got itchy feet. He's a traveling man and he'll keep on moving west till we run out of land." Everybody was excited about going to Saint Joseph, Missouri. It was where Pa was bringing them to join a wagon train headed for Oregon. It took them two weeks to reach Saint Joe. When they got to Saint Joe it was Pa and Billy who turn to be disappointed. They were too late for the wagon train. It had been gone for a week. They'd have to wait a month for the next one. After their long miserable ride from Jackson things moved pretty fast. ...read more.

Their heads were down. Their tails were in the air. The ground shook under their pounding hooves. "Hold your fire!" commanded Captain Jonah. Martha was sure the buffalo would crush them any second. She closed her eyes. "Fire! Fire! Fire!," shouted Captain Jonah. The guns barked and Martha's eyes flew open. Several buffalo in the front of the pack crumpled to the ground. More and more piled up behind them. But one huge wounded beast kept coming. He plowed into a wagon near there's. There was this sickening thud. The wagon rolled over. Martha heard screams and more gunfire's. The huge shaggy buffalo was slumped against a schooner. A red stain was spreading in the sand around the dead buffalo. Martha felt sick. But the gunfire was working. The solid line of buffalo split in the middle. They turned away from the pile of dead buffalo and ran past the wagons. Martha could see hundreds of brown shaggy legs flying by their wagon. "We've broken the stampede!" shouted Captain Jonah. The mad, rushing buffalo swung wide of the wagons. Soon the last of the huge herd passed them by. The dust began to settle. The thundering roar of the stampede faded away. "We're safe now," said Pa. "I'm going over to help the folks under the wagon and shook the dust off. Back at the wagon Pa told us we were going to stay put for the night. "It'll give us time to skin some buffalo for supper," he said. Billy went to skin the dead buffalo. Martha started greasing the wagon wheels. The men came back with big buffalo steaks. Ma fixed some for there supper. Martha couldn't eat the tough meat. Martha stared out across the starlit prairie. She felt so lonely. As far as she could see there was nothing just flat prairie stretching on and on. "Where is your Pa?" ...read more.

"We'll have to drop out of line and fix it." "How long will it take?" Martha asked Pa. "Maybe half a day," he answered. Captain Jonah rode up. "Tough luck," he said. "We're less than a day away from the crest. Then it's easy going. Tell you what we'll do. I'll camp an hour early tonight and start out an hour later tomorrow. That'll give you time to catch up." Pa thanked the captain. Then he rode off and left them to tend the broken wheel. Martha was scared seeing all the wagons go, and being left behind. By the time Pa fixed the wheel, it was dark. "Hurry! We've got miles to make up," he said. And he pushed the oxen as fast as he dared. "Pray for a bright moon," said Pa. "Driving by night is the only way we're going to catch up." But low hanging clouds blocked out the moon and the stars. It started to rain. "We'll have to stop," said Pa. "It's foolhardy to go on." "Might as well try to get some sleep," Ma said. Martha then realized it stopped raining. A bright patch of moonlight cut through the back of the wagon. "The moons out! It's so bright you can see everything! Pa! Pa! Martha called. Wake up! The rain's stopped. We can get moving!" Pa jumped up "By golly, our luck's changed. We'll catch up now!" he cried. Day was breaking when we saw the wagon train camp on the crest of the mountains. When we pulled into camp, Lauren ran to meet their wagon. "I knew you'd make it!" she shouted. I've got breakfast ready. As they had breakfast the sun suddenly popped out, round and red and beautiful. Captain Jonah's big voice boomed, "Look, folks. There it is. That's Oregon down there!" From there high perch you could see miles of wild, beautiful valleys stretching before them. For a moment no one said anything. Then Martha let out a yell and turned a cartwheel. Pa put his arm around Ma. "Now, this looks like our Journey to the New World." 1 ...read more.