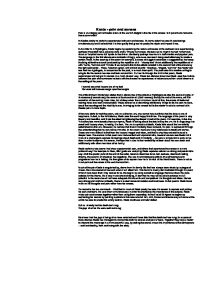 Pain is an integral part of Keats vision of the world - A delight in the life of the senses - Is it possible to reconcile these comments?

Keats - pain and senses Pain is an integral part of Keatss vision of the world A delight in the life of the senses Is it possible to reconcile these comments? In Keatss poetry he certainly experiences both pain and senses. To some extent he uses these feelings simultaneously and I believe that it is this quality that gives his poetry the depth and impact it has. In An Ode To A Nightingale, Keats begins by explaining the nature and cause of the sadness he is experiencing, sadness translated into a physical ache and a "drowsy numbness. He feels as he might if he had "of hemlock drunk or "emptied some dull opiate to the drains. He clearly portrays how he is in both mental and physical pain. The language in the first stanza also contrasts strongly, where we can see it being used effectively to create a certain mood. In the opening of the poem for example, a sense of sluggish heaviness is suggested by the heavy thudding alliterative sounds produced by the repetition of d - "drowsy and "drunk additionally the repetition of m with "numb, "hemlock and "minute. ...read more.

In fact, in the third stanza, Keats uses the word happy five times. The language of the poem is very flowery and beautiful, and it has the effect of lightening the deeper mood of the poem. For example, in the line "A flowery tale more sweetly than our rhyme:, Keats is talking about the tale told by the urn. He is disguising it as sweet and flowery when, in reality, it is dark. The urn is symbolic of death. Keats talks about the immortality established on this urn. However, he realizes that true immortality does not exist, his pain is expressed through the understanding that he can not be immortal. In this poem there are many references to death and sorrow. These are more difficult to find than the flowery images and ideas, and that is why they are said to be at a deeper level. The senses in this poem are more evident and unproblematic, however we can see Keats find it more of a challenge to express his feelings about death and immortality - his pain is simple terms such as he does in order to express his senses. ...read more.

In this poems Keats focus more on his thoughts and pain rather than his senses. To reconcile the two comments - I find that in much of Keats poetry he uses his senses to express and portray his pain and fears. He uses them simultaneously in order to emphasise the importance of the subject. Keats mixes pain and senses together rather than using them separately. In the Eve of St Agnes he begins by expressing his senses by painting a picture of the seen around him, chill, frozen and silence are just some of the words he uses to create this wintry section. Keats continues and later states: But no already had his death bell rung; The joys of all his life were said and sung He shows that the joys of being alive have vanished and it was fate that the death bell has rung. In a space of three stanzas Keats has managed to incorporate both his senses and pain or fears. Together they help a reader to interpret the meanings in a more powerful way, by setting the scene shows the importance of the atmosphere - cold and deathly, then continuing with the story. ...read more.