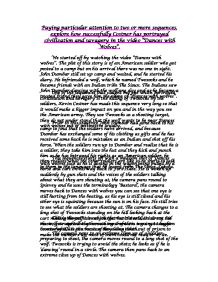 Paying particular attention to two or more sequences, explore how successfully Costner has portrayed civilization and savagery in the video Dances with Wolves

Paying particular attention to two or more sequences, explore how successfully Costner has portrayed civilization and savagery in the video "Dances with Wolves". We started off by watching the video ''Dances with wolves''. The plot of this story is of an American soldier who got posted to a camp but on his arrival there was no one in sight. John Dumbar still set up camp and waited, and he started his diary. He befriended a wolf, which he named Twosocks and he became friends with an Indian tribe The Sioux. The Indians saw John Dumbar dancing with the wolf one day and as he became a trusted friend they gave him the name of ''Dances with wolves''. One of the sequences that caught my eye which portrayed civilization and savagery is the killing of Twosocks by the soldiers, Kevin Costner has made this sequence very long so that it would make a bigger impact on you and in the way you see the American army. They use Twosocks as a shooting target, they do not under stand that the wolf wants to be near Dances with wolves out of instinctive loyalty. Prior to this sequence John Dumbar had gone back to his camp to find that the soldiers have arrived, and because Dumbar has exchanged some of his clothing as gifts and he has received some back he is mistaken as an Indian and shot off his horse. When the soldiers run up to Dumbar and realise that he is a soldier, they take him into the hut and they kick and punch him as he has betrayed his rights as an American soldier, he then realises what the other soldiers are like so he starts to talk to them in the language that he learnt from The Sioux, Lakota. This sequences starts off with a medium shot of Dances with wolves face as he is dozing in the wagon being pulled by a horse and cart on his way back to Fort Haze. ...read more.

The camera does an extreme close up of the back of the two white men facing up to the Pawnees on horses. The white men turn to walk away. The Pawnee on the left pulls out his hatchet and throws it at one of the white men, the shot is played in slow motion while we hear the swishing of the hatchet and the thud it makes when it hits the white man. We suddenly go from an idyllic scene to men running and women screaming for their kids. The thing that makes this scene so bad is the mother's screaming for their children and the whooshing of the flying hatchets, it is cacophony of sounds, the thing that stands out is Willy shouting ''Run Christine Run''. The camera stands still while Christine runs into the distance but then it moves back to the Indians as one Pawnee is off his horse and butchering someone with a hatchet, you can still hear Christine's mum calling her. The sequences end with a long shot of Christine still running and slowly disappearing like in the mist of time or like a ghost, being put back into the past; Christine is no longer Christine but ''Stands with a fist''. The third sequence that I'm going to analyse is the exchanging of presents. This is not a stereotypical sequence, because Costner does show the Americans Indians being civilised. Through the uses of camera work, Costner mostly focuses on the build up of John Dumbar and Wind In His Hair's friendship, because Wind In His hair at first didn't really accept John Dumbar and throughout this sequence the two men start to build up a friendship. When the Indians do accept a present, they feel that in return they have to give back something, they see this more like a trade. Wind In His hair knows that John Dumbar will do no harm to any of his tribe as he has just saved Smiles A Lot who is Wind In His Hair's brother. ...read more.

Wind In His Hair gets up, the camera follows him. There is a meaningful close up of the two men standing next to each other, this shot points out the differences between the two men for example the facial hair, the Indians have no facial hair and the Americans do. In the camera shot the two men are made to look the same height, this highlights that they are equal. Wind In His Hair acts as a go between trying to sort out the problem of the taken hat. There is a close up of Ten Bears. Wind in his hair talks to the Indian who took the hat, the Indian then looks to Ten Bears for support and Ten Bears (the chief) nods and the Indian agrees to the approval of the chief, The Indian has to give something back in return for the hat. There is a medium long shot of the two friends, Wind In Hair and John Dumbar in the left side of the shot and the other Indian on the right side of the shot, from this you can tell that the Indian is going to give in. we then have a close up of the Indian looking at his knife to show that the knife means a lot to him. The camera stays on the two friends. John Dumbar uses a Lakota word, which is very important as Wind In His Hair uses the expression ''good trade''. The use of this expression is the right place of the sequence, which is showing that Wind In His Hair wants to be John Dumbar's friend. The noises then start to pick up again. Kevin Costner has showed you a knew meaning to the word savagery. Stereotypically the Indians were bad and the American were peaceful but I know it was not like that Costner has made this film to show you that not everything is what it seems and you cannot put labels on things you don't know anything about. Colleen Wells ...read more.