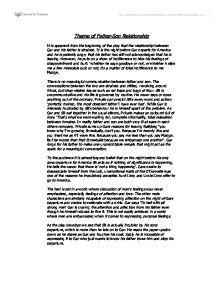 Theme of Father-Son Relationship It is apparent from the beginning of the play that the relationship between Gar and his father is strained. It is the night before Gar departs for America and he is patently angry that his father has still not acknowledged that he is leaving. However, he puts on a show of indifference to hide his feelings of disappointment and hurt: 'whether he says goodbye or not, or whether h slips me a few miserable quid or not, it's a matter of total indifference to me Madge. There is no meaningful communication between father and son. The conversations between the two are strained and stilted, revolving around trivial, dull shop related issues such as rat traps and bags of flour. SB is uncommunicative and his life is governed by routine. He never says or does anything out of the ordinary. Private can predict SB's every word and action: 'perfectly trained, the most obedient father I have ever had'. ...read more.

The text is set in a world where discussion of men's feelings was never emphasised, especially feelings of affection and love. The other male characters are similarly incapable of expressing affection on the night of Gars departure and decide to celebrate with a drink. Gar says 'To h**l with all strong men' Gar is craving the attention and affection from his father even though he himself refuses to five it. This is not easily achieved in a world where men are embarrassed when it comes to expressing personal feelings. As the play develops we see that SB is actually troubled by his sons departure, which is more than he lets on to Gar. He reads the paper upside down as he stares as Gar and touches his coat. Sadly he is incapable of expressing it to Gar who just wants to know his father loves him and stop his departure. As the play continues Gar becomes increasingly desperate to communicate with his father. ...read more.

The world in which Gar lived in lead him to refer to Kate as an 'aul b***h' rather than blaiming himself for the failure of their relationship. He fails to reveal his true feelings for her on the night she visits before her departure and hides his upset with the bravado of the boys. The culture that surrounds Gar and his father lead them to be uncommunicative and they have a damaged relationship. Men at that time were not supposed to reveal their emotions and expected to be strong. Class played a big role as Senator Doogan didn't want his daughter to marry a shop boy but a doctor whose father he went to college with. This also shows how during this time many families who were either upper-middle class or upper class had arranged marriages which is similar to Hindu cultures or Muslim cultures in the Far East. Gar also wants to escape restraints that Ballybeg (translated as small town) has such as the limited amount of jobs and the amount of money that you can earn. ?? ?? ?? ?? ...read more.