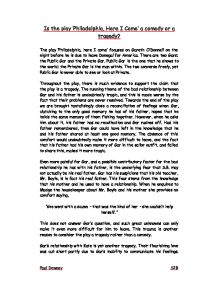 Is the play 'Philadelphia, Here I Come' a comedy or a tragedy? The play 'Philadelphia, here I come' focuses on Gareth O'Donnell on the night before he is due to leave Donegal for America. There are two Gars; the Public Gar and the Private Gar. Public Gar is the one that he shows to the world; the Private Gar is the man within. The two converse freely, yet Public Gar is never able to see or look at Private. Throughout the play, there is much evidence to support the claim that the play is a tragedy. The running theme of the bad relationship between Gar and his father is undoubtedly tragic, and this is made worse by the fact that their problems are never resolved. Towards the end of the play we are brought tantalisingly close a reconciliation of feelings when Gar, clutching to the only good memory he has of his father, hopes that he holds the same memory of them fishing together. However, when he asks him about it, his father has no recollection and Gar rushes off. Had his father remembered, then Gar could have left in the knowledge that he and his father shared at least one good memory. The absence of this comfort would undoubtedly make it more difficult to leave, and the fact that his father had his own memory of Gar in the sailor outfit, and failed to share this, makes it more tragic. ...read more.

This, along with the unresolved conflict with his father and questions about his mother's promiscuity are indeed no laughing matter, and are in no way comic. When his aunt Lizzy first asked Gar if he wanted to go to America, he jumped at the chance saying, "as soon as I can". These massive loose ends, by the end of the play, add up to make a once sure Gar unsure about why he is leaving. Private Gar asks, "God, Boy, why do you have to leave? Why? Why?" to which Public Gar replies, "I don't know. I - I - I don't know." Gar is unsure about the only thing he was sure about, and this is truly tragic. However, there are aspects of the play that are undoubtedly comedic. The dialogue where Private Gar, impersonating S.B., has a conversation with Public Gar, sharing anecdotes about bowel movement problems is one example. This develops into an absurd imitation of Americans courting. Another example is when Private Gar has an imaginary discussion with Gar's father about being a sex maniac, changing the subject when Madge enters to a clich�d one about the weather, as though she could hear. Overall the sarcastic commentary of Private Gar is the main aspect of comedy in the play, providing humorously cutting insults for the reader to enjoy. ...read more.

When she succeeds, we see that her ulterior motive was to use Gar as a substitute for the child she never had when she throws her arms around him and cries, saying, "My son, Gar, Gar, Gar...." Lizzy is clearly a very eccentric and talkative woman, barely giving anyone else a chance to speak, and she tries to build up the impression people have of her and the life she leads. This suggests to me that she is actually quite an unhappy person and acts this way to try and convince people otherwise. We get a glimpse of her vulnerable side when she begins to cry over the mere mention of her deceased sisters: "Poor Aggie - dead. Maire - dead. Rose, Una, Lizzy - dead - all gone - all dead and gone." To me Lizzy is a tragic character, and whatever comedy she brings to the play, does not outweigh this. It is for these reasons that I believe that 'Philadelphia, Here I Come' is a tragedy as opposed to a comedy. The humour incorporated in the play is all too often entwined with more malevolent emotion, usually hate or sadness, and any other examples of humour are of too little substance to surpass this. The tragic aspects of the play are dominant with evidently no one getting what they truly want by the end. With this in mind, it is not difficult to conclude that the play is undeniably a tragedy. ?? ?? ?? ?? Paul Downey S2B ...read more.