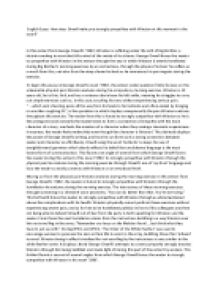 Physical Jerks Extract &quot;1984&quot;. How does Orwell make you strongly sympathise with Winston at this moment in the novel?

Ã¯Â»Â¿English Essay: How does Orwell make you strongly sympathise with Winston at this moment in the novel? In this extract from George Orwellâ€™s â€˜1984â€™, Winston is suffering under the rath of Big Brother, a dictator seeking to now take full control of the minds of its citizens. George Orwell forces the reader to sympathise with Winston in this extract through the way in which Winston is utterly humiliated during Big Brotherâ€™s morning exercises by an instructress, through the physical â€˜tortureâ€™ he suffers as a result from this, and also from the deep shame he feels as he reminisces his past regrets during the exercise. To begin this essay on George Orwellâ€™s novel â€˜1984â€™, the extract under question firstly focuses on the unbearable physical pain Winston endures during his compulsory morning exercise. Winston is 39 years old, he is thin, frail, and has a varicose ulcer above his left ankle, meaning he struggles to carry out simple exercises such as, in this case, touching his toes without experiencing serious pain. ...read more.

Youâ€™re not trying.â€ This forthwith forces the reader to strongly sympathise with Winston through as aforementioned above the complications with his health. Winston physically cannot perform these exercises without experiencing severe pain, and so for him to be humiliated publicly in front of his colleagues and then not being able to defend himself out of fear from the party is both upsetting for Winston and the reader. From there the next humiliation stems from the instructress belittling in a way Winston over him not enrolling in the army; â€œRemember our boys on the Malabar front!...Just think what they have to put up with.â€ During WW1 and WW2, â€˜The Order of the White Featherâ€™ was used to encourage women to pressure the men in their life to enrol in the army, belittling those that â€˜refusedâ€™ to enrol. Winston being in effect trivialized for not enrolling by the instructress is very similar to the white feather order. ...read more.

For the final time this flaunts a third of several angles from which George Orwell forces the reader to strongly sympathise with Winston in his novel â€˜1984â€™. In conclusion, I feel the ways in which George Orwell conveyed strong sympathy towards Winston through forcing the reader to feel melancholy from each of all his pain, humiliation, and awkward feelings was both splendid and classically George Orwell. Orwellâ€™s somewhat journalistic style of writing provides a very relatable connection between reader and character through the empathy caused by the strong sympathy forced upon the reader. In Orwellâ€™s â€˜Animal Farmâ€™, he similarly through proficient allegory writes about the dangers of society at the time, containing dark settings with themes relating to communism and the Soviet Union in the same way â€˜1984â€™ relates to unchecked capitalism in todays Russia. These of which all force the reader to feel strong sympathy over the subjects at hand and reminisce a time in history so dark it almost pushes itself to the back of most of our minds, and Orwell hiding such history in his novels is extremely powerful because of this. ...read more.