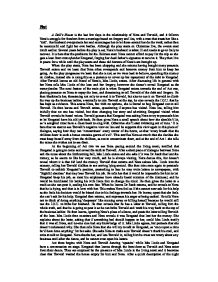 Plot and Sub-Plot of A Doll's House

Plot A Doll's House is the last few days in the relationship of Nora and Torvald, and it follows Nora's struggle for freedom from a marriage based on forgery and lies, with a man that treats her like a 'doll'. Her husband overprotects her and encourages her to let those around her do the work, rather then be resourceful and fight her own battles. Although the play starts on Christmas Eve, the events start much earlier. Several years before the play is set, Nora's husband is taken ill and needs to go to Italy to recover. It is here that the problems for the Helmers start. Nora cannot afford to pay for the trip so she gets a loan from moneylender Krogstad, forging her dead father's signature to receive it. They then live in peace for a while until the play starts and these old demons of Nora's are brought up. When the play starts, Nora has been shopping and she returns having bought many presents. Torvald enters and we learn that Nora often overspends and borrows money from him to keep her going. As the play progresses we learn that she is not, as we were lead to believe, spending this money on clothes, instead she is using this as a pretence to cover up her repayment of the debt to Krogstad. After Torvald leaves an old friend of Nora's, Mrs Linde, enters. After discussing life in general with her Nora tells Mrs Linde of the loan and her forgery, however she doesn't reveal Krogstad as the moneylender. ...read more.

He then leaves, ignoring Nora's pleas of silence, and posts the letter telling Torvald of the loan. Mrs Linde then re-enters and Nora reveals it was Krogstad that lent her the money. She explains about the letter, asking that if something bad should happen to her, could Mrs Linde testify that it was all Nora, and no-one else had any knowledge of it. Mrs Linde agrees, but protests that she doesn't understand why. She then tells Nora that she will try to talk to Krogstad, as 'once upon a time he'd have done anything' for her sake. She asks Nora to make sure Torvald doesn't check his mail, and exits to talk to Krogstad. Nora thanks her, and lets Torvald in, telling him he must not worry about any business until after the dance, and he cannot even open his letters. Act three begins with Nora and Torvald dancing 'upstairs' while Mrs Linde and Krogstad have a conversation on stage. Krogstad then leaves through the front door as Torvald and Nora enter from their dance. They are surprised by the presence of Mrs Linde in the living room and it becomes clear that Torvald wanted the house empty for him and Nora. After a quick description of the night from Torvald, Mrs Linde leaves and Torvald seems to be in a particularly happy mood, obviously still excited from the dance. He then attempts to claim his conjugal rights, but Nora pushes him away, and as she does so Dr. ...read more.

Linde and he used to forge signatures. Krogstad comes into the play because he is upset at losing his job, though unknowingly to his ex-lover, and he plans to use his knowledge of the forgery to climb his way back to the top of business hierarchy by bribing Nora and Torvald. He is very willing to follow through with his plan until he gets together with Mrs. Linde, when he becomes so happy he decides not to continue the bribery, because he no longer has the need, but now Mrs. Linde convinces him to carry on, and he posts the letter to Torvald, revealing the truth of Nora's loan. This journey taken by Krogstad and Mrs Linde is through the play is a key part of the sub-plot because it is through their love and reunion that the truth behind Nora's forgery is revealed, so it is this sub-plot that finalises the events of the main plot. Krogstad and Mrs. Linde's reunion is also highly ironic, because they only meet because Mrs. Linde is replacing him at the bank, but this replacement is the first step towards them rekindling their old love. Dr. Rank is Nora's long time friend and confidante that suffers from Tuberculosis of the spine, due to the 'fun' his father had as a 'gay lieutenant'. He declares is love for Nora in the second act, just as she was about to ask him for money to repay the loan to Krogstad. This declaration takes her by surprise and she feels that it compromises their friendship and she can no longer rely on him or confide in him. ...read more.