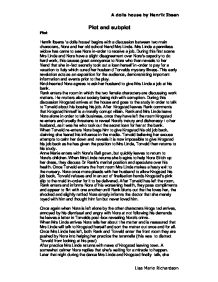 Plot and subplot Plot Henrik Ibsens 'a dolls house' begins with a discussion between two main characters, Nora and her old school friend Mrs Linde. Mrs Linde a penniless widow has came to see Nora in-order to receive a job. During this first scene Mrs Linde and Nora have a slight disagreement over Nora's capacity to do hard work, this causes great annoyance to Nora who then reveals to her friend that she in-fact secretly took out a loan herself in-order to pay for a vacation to Italy which cured her husband Torvalds mystery Illness. This early revelation acts as an exposition for the audience, demonstrating important information and events prior to the play. Kind-hearted Nora agrees to ask her husband to give Mrs Linde a job at his bank. Rank enters the room in which the two female characters are discussing work matters. He mutters about society being rich with corruption. During this discussion Krogstad arrives at the house and goes to the study in order to talk to Torvald about his loosing his job. ...read more.

When Mrs Linde arrives Nora tells her about the matter and is reassured that Mrs Linde will talk to Krogstad herself and sort the matter out once and for all. Once Mrs Linde has left, both Rank and Torvald enter the front room they are pushed by Nora into helping her practice the tarantella (this was to distract Torvald from looking at his post) After practice Mrs Linde returns with news of Krogstad leaving town. A somewhat calmer Nora replies that she's waiting for a miracle to happen. Later that night during the dance Mrs Linde and Krogstad finally talk, she admits that she left him for money but that she always loved him. They decide to get back together and Krogstad decides to ask for his letter back from Torvald, Mrs Linde convinces him not to claiming that Torvald needs to know about it. They then exit together. When Torvald and Nora re-enter they are merry and giddy however when checking his post Torvald finds that he has three letters, two from Dr Rank with black crosses on them (this signified the beginning of his death) ...read more.

Mrs Linde is difficult to interpret and is an incredibly ambiguous character she could be described as either being selfish, as she initially left Krogstad to better her financial situation or she could also be perceived as selfless because she chose not to marry Krogstad so that she could provide for her family. The final sub plot is the effect of sins from the older generation. Their families married off both Nora and Mrs Linde; this was due to both their fathers failing to receive enough income therefore the girls had to sacrifice themselves in order to salvage the situation. Dr Rank's father when discovering his illness should had sought for a cure however instead he ignored it and went on to infect his wife and child. Mrs Linde's husband failed to provide for her after his death both financially and mentally; Torvald too would not allow Nora to open the post-box. Therefore Nora's daughter would have been inflicted the same fate. Nora became aware of the 'condition' inflicted upon her by her father and husband late, but unlike Rank had time to cure it. ?? ?? ?? ?? A dolls house by Henrik Ibsen Lisa Marie Richardson ...read more.