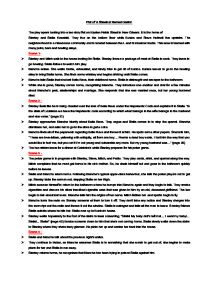 Plot of 'A Streetcar Named Desire'.

Plot of 'A Streetcar Named Desire' The play opens looking into a two story flat on Elysian Fields Street in New Orleans. It is the home of Stanley and Stella Kowalski. They live on the bottom floor while Eunice and Steve Hubbell live upstairs. The neighbourhood is a mixed-race community and is located between the L and N streetcar tracks. This area is teemed with many pubs, bars and bowling alleys. Scene 1- > Stanley and Mitch walk to the house looking for Stella. Stanley throws a package of meat at Stella to cook. They leave to go bowling. Stella follows to watch him play. > Blanche enters. She walks inside, exhausted, and kindly tries to get rid of Eunice. Eunice leaves to go to the Bowling alley to bring Stella home. She finds some whiskey and begins drinking until Stella comes. > Blanche tells Stella that she lost Belle Reve, their childhood home. Stella is distraught and escapes to the bathroom. > While she is gone, Stanley comes home, recognising Blanche. They introduce one another and chat for a few minutes about Blanche's past, relationships and marriage. She responds that she was married once, but her young husband died. Scene 2 - > Stanley feels like he is being cheated over the loss of Belle Reve under the Napoleonic Code and explains it to Stella. "In the state of Louisiana we have the Napoleonic code according to which what belongs to the wife belongs to the husband and vice versa." (page 21) > Stanley approaches Blanche bluntly about Belle Reve. ...read more.

Stanley tells Stella that Blanche has been lying to both Mitch and them. He has a friend who travels through Laurel all the time and knows exactly the reputation that Blanche has earned. She lived at a second-rate hotel called the Flamingo where she visited with so many men that the management asked her to leave. "The trouble with Dame Blanche was that she couldn't put on her act any more in Laurel! They got wised up after two or three dates with her and then they quit, and she goes on to another, the same old line, same old act, same old hooey! But the town was too small for this to go on forever! And as time went by she became a town character. Regarded as not just different but downright loco-nuts." (Page 80) He also tells her she did not resign from her teaching position. She was fired because she got mixed up with a seventeen-year-old boy and she was forced to leave town. > Mitch has been invited to Blanche's birthday celebrations. Stanley tells Stella that he told Mitch what he knew about Blanche and says not to expect him. He also says that he bought her a bus ticket for Tuesday to leave. Stella is furious and asks Stanley what Blanche will do, he replies, "Her future is mapped out for her." (page 85) Scene 8 - > Stanley, Blanche, and in the kitchen celebrating. Mitch hasn't turned up. Blanche tries to cover up the melancholy. > Blanche realises the uncomfortable atmosphere and thinks it has something to do with Mitch and why he didn't come. ...read more.

He says no and takes off his hat to become a kind man. He offers her his hand and she takes it, walking out of the house, slowly. She says, "Whoever you are - I have always depended on the kindness of strangers." (page 123) They walk away. > Stella runs after her and Stanley runs after Stella. He comforts her, pleased that this ordeal has concluded. He tries to unbutton her blouse. Overview This is such a good play to study because of Tennessee Williams' talent to tell stories. A Streetcar Named Desire doesn't contain any acts. This is due to the fact that if it did, it would break the tension that Tennessee has so skilfully climaxed and anti climaxed. Also Tennessee targeted his writing towards TV production. Williams draws the viewer into the story very successfully. The whole play pivots around Blanche. She has the last say in every scene, except the scene 10 when she gets raped. This shows her power over the other characters intellectually and through her knowledge. Tennessee also exercises the power of repetition, not only by repeating the poker night, but also when Blanche enters the poker game at both points in the play, she asks the men not to stand in her presence, although clearly they weren't going to anyway. This shows that although her mental state has deteriorated, she still feels she holds the same values. That saying things that would be expected of people of a higher class will make her some how superior. This leads to how Tennessee Williams gives you the urge to read on. As a reader I felt compelled to find out what happened to Blanche in the end, and whether or not Stella honoured her marriage to Stanley. ...read more.