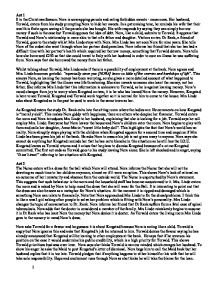 Act 1 It is the Christmas Season: Nora is unwrapping parcels and eating forbidden sweets - macaroons. Her husband, Torvald, enters from his study prompting Nora to hide her sweets. In a patronising tone, he reminds his wife that their wealth is finite upon seeing all the parcels she has bought. His wife responds by saying they can simply borrow money if such is the case but Torvald opposes the idea of debt. Nora, like a child, submits to Torvald. It appears that Torvald and Nora's relationship is more akin to that of a father and daughter. Visitors arrive. Dr Rank, a friend of Torvald, goes to the study whilst Mrs Linde stays with Nora. Mrs Linde has not seen Nora for nine years. She tells Nora of the ordeal she went through when her partner died penniless. Nora informs her friend that she too has had a difficult time with her partner's health which required her borrow money, something that Torvald detests. Nora tells how she borrowed �250 so that she could travel to Italy with her husband in order to cure an illness he was suffering from. Nora says that she borrowed the money from her father. ...read more.

Hope and excitement runs through Nora as she thinks he will take the blame for the loan. Krogstad enters and is enraged as he has been sacked. He eventually calms himself and tells Nora that he will not publicise the information but that he must inform Torvald. Nora does not wish for Torvald to be informed and protests Krogstad's plans. Krogstad walks to the letter box and slips a pre prepared letter into the letter box. He does this thinking that he will be given his old job back. Mrs Linde enters whilst Nora is fretting over the letter. Mrs Linde questions Nora's anxiety and is told that Krogstad has dropped a letter into the letter box. Mrs Linde makes the association between Nora's erratic state and the letter: It is Krogstad who leant Nora the money. Mrs Linde thinks it is better if Torvald knows what happened but Nora begs to differ. Mrs Linde offers to talk with Krogstad. She will tell him to ask Torvald to return the letter unread. Nora goes to distract Torvald as it is approaching the time when he usually goes to empty the letter box. Nora enters Torvald's study and Torvald insists he must go to check his letters. ...read more.

Nora announces that she must learn how to grow up. Torvald exclaims shock and says that this must be because she no longer loves him. Nora agrees adding that the love was lost upon hearing what he said earlier. Nora elaborates saying that he said he would take care of any problem that occurred to her. She thought that this "miracle" would have happened to her but it did not. Torvald says that he would gladly take care of any problems but not if his honour would be sacrificed. Torvald says that he sees a wide space between them and wonders if it can be fixed. Nora says no and goes for her bag. Torvald asks her to stay one more night but Nora declines. Nora bids farewell and tells Torvald that he is free from her and vice versa. Torvald asks if he may make contact or send things to Nora but she says no. Torvald asks if they can be anything other than strangers to which Nora says a miracle would have to happen and she no longer believes in miracles. Nora departs leaving Torvald alone in a chair. Torvald ponders on the possibility of a miracle and a flash of hope surges through him only to be shattered by the door closing downstairs. 1 ...read more.