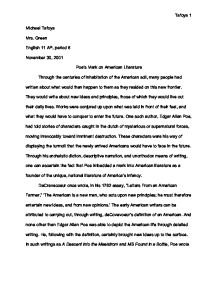 Michael Tafoya Mrs. Green English 11 AP, period 6 November 30, 2001 Poe's Mark on American Literature Through the centuries of inhabitation of the American soil, many people had written about what would then happen to them as they resided on this new frontier. They would write about new ideas and principles, those of which they would live out their daily lives. Works were conjured up upon what was laid in front of their feet, and what they would have to conquer to enter the future. One such author, Edgar Allan Poe, had told stories of characters caught in the clutch of mysterious or supernatural forces, moving irrevocably toward imminent destruction. These characters were his way of displaying the turmoil that the newly arrived Americans would have to face in the future. Through his archaistic diction, descriptive narration, and unorthodox means of writing, one can ascertain the fact that Poe imbedded a mark into American literature as a founder of the unique, national literature of America's infancy. DeCrevecoeur once wrote, in his 1782 essay, "Letters From an American Farmer," 'The American is a new man, who acts upon new principles; he must therefore entertain new ideas, and from new opinions.' ...read more.

The man kept a steady watch over his roommate, until he eventually killed him out of sheer fear. The main character, just like many of the Americans at that time, even through drastic actions, overcame his fear. A characteristic of the "new man" of America was one of being able to conquer the tasks that stood in front of him. This kind of heroic character that Poe created embodied the typical American - someone who was ready to search for a new life, encounter the hardships that would come, and endure the strains put on them both physically and mentally. It was through works of literature like Poe's where Americans gained motivation to be all that they could. Along with fear, strength was a characteristic of the new American. Strength can be seen in the characters in his A Descent into the Maelstrom and The Balloon-Hoax. A fourth device in which Poe uses ever so well is description, especially of the story's setting. By describing the entire setting with great detail, Poe doesn't leave the reader wondering what any of the setting looks like. ...read more.

They might have thought that they could handle the new life, but fell while trying to do so. Along with this idea, Poe wrote of an "Evil Eye." In Mediterranean faiths, the evil eye was centered around a belief that whoever controlled the evil eye could cause harm just by a single look (Womack). It's through such themes that Poe mixes together beliefs and lifestyles of foreign nations, with those of America, thus creating an authentic representation of their lifestyles. Edgar Allan Poe was capable of allowing the entire world to read and see what the Americans had to put up with while living on American soil. Like other early American writers, Poe wrote about, even though it wasn't stated, American life and the gruesome struggles of which Americans encountered. Poe wrote about the New World as the inhabitants experienced it. Poe characterized the "new man" as a hero, a man who went to the end for his cause. The readers of his stories could easily adapt to the underlying story of each one. It is in this manner, that Edgar Allan Poe left his mark in the creation of a unique, national American literature. ...read more.