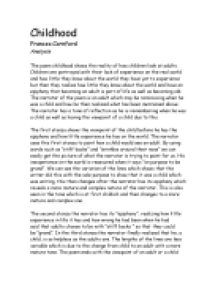 ﻿Childhood Frances Cornford Analysis The poem childhood shows the reality of how children look at adults. Children are portrayed with their lack of experience on the real world and how little they know about the world they have yet to experience but then they realize how little they know about the world and have an epiphany that becoming an adult is part of life as well as becoming old. The narrator of the poem is an adult which may be reminiscing when he was a child and how he then realized what has been mentioned above. The narrator has a tone of reflection as he is remembering when he was a child as well as having the viewpoint of a child due to this. The first stanza shows the viewpoint of the child before he has the epiphany and how little experience he has on the world. The narrator uses this first stanza to paint how a child would see an adult. By using words such as ?stiff backs? and ?wrinkles around their nose? we can easily get the picture of what the narrator is trying to paint for us. ...read more.

The poem ends with the viewpoint of an adult or a child which has realized the truth of the world and is no longer a child. The author uses words and phrases to enhance the text as well as to reaffirm some things in the poem. Although figures of speech which appear on the poem are not a lot, they create the effect which the author was looking for. The reader will feel through the words how the childish feel at the start of the poem changed until it takes a more mature adult-like feel. The poem does not have a high level of formality due to the narrator?s nature. The description which is given by the narrator in the first stanza is enhanced with the simile ?veins like small fat snakes on either hands.? which give a clearer and more detailed picture of how a child sees an adult. The imagery of the poem is greatly seen in the first and third stanza of the poem which gives life to the poem and enhances the effect given by the poem. ...read more.

The poem has a AA BB CC ED DE rhyme pattern and also has a kind of rhythm that is repeated twice in it. This combination of rhyme and rhythm gives the poem an almost melodic feel like a song. And even if the author doesn?t use any kind of alliteration he still uses a rhyme of hard vowels to give the poem a catchy nature. But at the end of the poem the author uses some repetition in the end of the lines, like the words ?helplessly? which also help him achieve an antithesis in that part of the poem. In conclusion, childhood is the stage where children are inexperienced and know nothing about the world they live in. The narrator of the poem has a revelation which shows him that adults are as hopeless as he is and cannot choose to be old or not as it is part of life. The narrator of the poem may be reminiscing about when he was a child, s it is shown by the used tone and the words implemented. I this poem portrays the mind of a child and it is what gives the essence to the poem itself. ...read more.