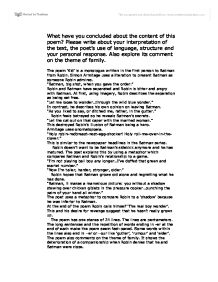 What have you concluded about the content of this poem? Please write about your interpretation of the text, the poet's use of language, structure and your personal response. Also explore its comment on the theme of family. The poem 'Kid' is a monologue written in the first person to Batman from Robin. Simon Armitage uses alliteration to present Batman as someone Robin admires. "Batman, big shot, when you gave the order." Robin and Batman have separated and Robin is bitter and angry with Batman. ...read more.

This destroyed Robin's illusion of Batman being a hero. Armitage uses onomatopoeia. "Holy robin-redbreast-nest-egg-shocker! Holy roll-me-over-in-the-clover." This is similar to the newspaper headlines in the Batman series. Robin doesn't want to be Batman's sidekick anymore and he has matured. The poet explains this by using a metaphor which compares Batman and Robin's relationship to a game. "I'm not playing ball boy any longer...I've doffed that green and scarlet number." "Now I'm taller, harder, stronger, older." Robin hopes that Batman grows old alone and regretting what he has done. ...read more.

The lines are pentameters. The long sentences and the repetition of words ending in -er at the end of each make the poem seem fast-paced. Some words within the lines also end in -er or -our like 'gutter', 'rumour' and 'elder'. The poem also comments on the theme of family. It shows the deterioration of a companionship when Robin denies that he and Batman were close. "Now I've scotched that 'he was like a father to me' rumour, sacked it, blown the cover on that 'he was like an elder brother' story." I think that this poem shows Simon Armitage using humour to illustrate how a hero's (a celebrity or an admired family member) status can be diminished. ...read more.