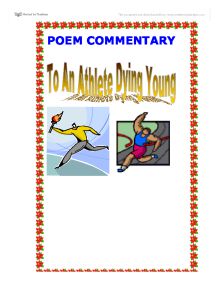 Poem Commentary: To An Athlete Dying Young by A.E. Housman

POEM COMMENTARY The time you won your town the race We chaired you through the market-place; Man and boy stood cheering by, And home we brought you shoulder-high. To-day, the road all runners come, Shoulder-high we bring you home, And set you at your threshold down, Townsman of a stiller town. Smart lad, to slip betimes away From fields were glory does not stay And early though the laurel grows It withers quicker than the rose. Eyes the shady night has shut Cannot see the record cut, And silence sounds no worse than cheers After earth has stopped the ears: Now you will not swell the rout Of lads that wore their honours out, Runners whom renown outran And the name died before the man. So set, before its echoes fade, The fleet foot on the sill of shade, And hold to the low lintel up The still-defended challenge-cup. ...read more.

The word "threshold" symbolizes the grave of the athlete, which is another symbolical use of words that can be linked to the context of the poem. The ironic tone of the poem becomes crestfallen, almost envious as the speaker contemplates his own past. The quote "Smart lad, to slip betimes away; From fields where glory does not stay" presents a usage of satire. By this, the speaker expresses that the athlete was lucky to miss watching himself slip from fame, becoming again just another face in the crowd by denoting that he himself had experienced the same fate. The citation, "the laurel grows; it withers quicker than the rose" reflects on the fleeting existence of glory. The laurel exemplifies accomplishments and the rose symbolizes life. It signifies that although the athlete's glory came early in life, it will not remain memorable in the eyes of society for a long time as the records will be broken and new individuals will steal the spotlight. ...read more.

famous person, it is better to die at the height of his glory, so as to not suffer from seeing his achievements fade and becoming worthless in the eyes of the community. Through his death, the athlete's status as a champion was set as connoted by "So set, before its echoes fade ... sill of shade." The stanza containing this quote indicates that his status will never diminish in his perception. "find unwithered ... garland briefer ..." also indicates that although his body is deteriorated, the garland, which symbolized his glories, remains unwithered. Hence, this is also another way by which the poet had tried to convey significant meanings to readers. In conclusion, I think that the poem had been crafted competently, and the meanings, symbols & messages which the poet wishes to impress upon the readers are lucid and comprehensible, which can be useful to them in many things, including typical daily life. [600 Words] ...read more.