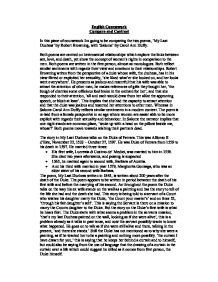 English Coursework Compare and Contrast In this piece of coursework Im going to be comparing the two poems, 'My Last Duchess' by Robert Browning, with 'Salome' by Carol Ann Duffy. Both poems are centred on heterosexual relationships which explore the links between sex, love, and death, yet show the concept of women's rights in comparison to the men. Both poems are written in the first person, almost as monologues. Both reflect similar sentiments with regards their view and emotions to their relationships. Robert Browning writes from the perspective of a duke whose wife, the duchess, has in his view flirted or exploited her sexuality, 'she liked what'er she looked on, and her looks went everywhere'. He presents as jealous and resentful that his wife was able to attract the attention of other men, he makes references of gifts they bought her, 'the bough of cherries some officious fool broke in the orchard for her', and that she responded to their attention, 'all and each would draw from her alike the approving speech, or blush at least'. This implies that she had the capacity to attract attention and that the duke was jealous and resented her attentions to other men. Whereas in Salome Carol Ann Duffy reflects similar sentiments in a modern context. The poem is re-laid from a female perspective in an age where women are easier able to be more explicit with regards their sexuality and behaviour. ...read more.

this as I mentioned the Duke talking to the painting as if she were there that he drew the curtain on her life as he draws the curtain over her as she stands as a painting. 'Dies along the throat;' suggesting he knew how she was to die but it wasn't age as you can see. It was something down her throat maybe with facts saying suggested poisoning backs my idea up. But the final quote I can pick shows the Dukes power to have a life taken and shows that the jealousy has stopped now he feels what he didn't like has been pulled to a halt. 'I gave commands; then all smiles stopped together. There she stands', this saying to give commands he has the power and for the smiles to stop he feels slightly relieved maybe, but to end by saying there she stands, I get the impression he is proud with what he has done. And for the servant to be sat there on his mission, I get the impression the Duke is saying this is what has happened before so do as you please on your mission. Not a bothered man as he has his power and possessions, which complete him. The poem Salome is a modern take on a biblical story as the real story behind this poem is found in the New Testament books of Matthew (Chapter 14.6-11) and Mark (6.22-28), and took place about AD 30. ...read more.

Where as Salome has a different approach to it. The structure isn't particularly the standard poetry you would expect. I see it as laid out as thoughts, the speaker speaking to themselves. This seems appropriate to this poem helping the ideas it tries to convey. Such as the character waking up to a different man everyday, saying there is no relationships, therefore being nobody for her to talk to other than herself. In conclusion I feel both poems have strong ideas or themes as it were to convey. Thus being, from My Last Duchess, that in the 1500's men were seen as more dominant over women, and the poem being written in 1845, I think that Browning is suggesting the question as to whether this has changed or not, are men still more powerful than women? And from Salome, I feel that maybe it's suggesting that the way the character of poem is behaving, the women sleeping around not knowing who she wakes up with, suggests that women might not help themselves as much as they may think. Or another idea I can pull from the poem, is the link to the biblical story. And this could be saying that have things changed over time? So from both poems I feel rather than conveying a specific idea, I get the impression its conveying a question which the reader then answers themselves. Therefore I feel is the reader that creates their own idea of the poem. ...read more.