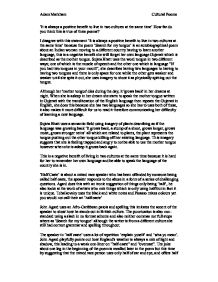 Poems from other cultures

'Half Caste' is about a mixed race speaker who has been offended by someone being called half caste, the speaker responds to the abuse in a form of a series of challenging questions. Agard does this with an ironic suggestion of things only being 'half', he also looks at the work of artists who mix things which is only using half but in fact it is unique. Tchaikovsky uses the black and white notes and Picasso mixes colours yet you would not call their art 'half caste' John Agard uses an Afro-Caribbean patois and spelling this imitates the accent of the speaker to show how he stands out in British culture. The punctuation is also non-standard using a slash in no format scheme and also neither commas nor full stops where as 'Search for my tongue' although the writer is from a different culture she still had correct grammar and spelling throughout. The speaker in 'half caste' uses a lot of repetition 'explain yuself' and 'wha yu mean'. John Agard playfully points out how England's weather is always a mix of light and shadow, this leading to a weak one-liner on "half-caste" and "overcast". ...read more.

The third stanza shows what good lives the white people have 'brash with glass' describes them as showing off, it says the name flaring like a flag as suddenness of how the restaurant is new, it uses a build up of words 'new, up-market, haute cuisine' this shows its classy and fashionable where as the fourth and fifth stanza contrasts to show inequality between the black and white people. The "white's only inn" is elegant, with linen tablecloths and a "single rose" on each table. It is contrasted with the fast-food "working man's cafe" which sells bunny chows. There is no tablecloth, just a plastic top, and there is nowhere to wash one's hands after eating: "wipe your fingers on your jeans". As he backs away from the glass at the end of the poem, Afrika sees himself as a "boy again" He is so angry that it describes his hands as burning. He wants to break the glass, he may want to literally to break the window, but this is obviously meant in a emblematic sense. He wants to break down the system, which separates white and black, rich and poor, in South Africa. Adam Markham Cultural Poems ...read more.