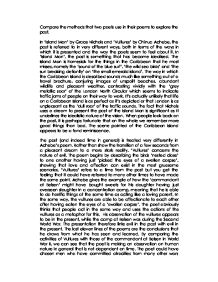 Poems in the anthology

Compare the methods that two poets use in their poems to explore the past. In 'Island Man' by Grace Nichols and 'Vultures' by Chinua Achebe, the past is referred to in very different ways, both in terms of the ways in which it is presented and the way the poets seem to feel about it. In 'Island Man', the past is something that has become idealised. The Island Man is homesick for the things in the Caribbean that he most misses, namely the 'sound of the blue surf', 'the wild sea birds' and 'the sun breaking defiantly' on 'the small emerald island'. The way in which the Caribbean Island is described sounds much like something out of a travel brochure, conjuring images of unspoilt beaches, abundant ...read more.

The past (and indeed time in general) is treated very differently in Achebe's poem. Rather than show the transition of a few seconds from a pleasant dream to a more stark reality, 'Vultures' concerns the nature of evil. The poem begins by describing the birds 'nested close' to one another having just 'picked the eyes of a swollen corpse', showing that love and affection can exist in the most gruesome scenarios. 'Vultures' refers to a time from the past but you get the feeling that it could have referred to many other times to have made the same point. Achebe gives the example of how the 'commandant at Belsen' might have bought sweets for his daughter having just overseen slaughter in a concentration camp, meaning that he is able to do horrific things at the same time as acting like a loving parent. ...read more.

By comparing the activities of Vultures with those of the commandant at Belsen in World War II, we can see that the poet is making an observation on human nature in general that is not dependent on time. The poet could have chosen men who have committed atrocities from many other wars over the ages without affecting the impact of the poem. Those responsible for genocides may still show touching concern for their 'tender offspring'. Time is irrelevant in 'vultures' as the past is something that serves to show that human nature doesn't change. The poem begins with an observation from the present and then gives a theoretical example from the Second World War of the 'commandant at Belsen' who will 'pick up a chocolate for his tender offspring' and ends with the ambiguous conclusion on how 'the perpetuity of evil' can be viewed. ...read more.