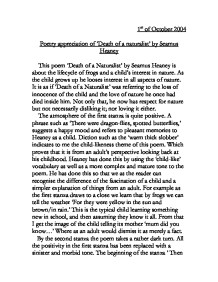 Poetry appreciation of 'Death of a naturalist' by Seamus Heaney

1st of October 2004 Poetry appreciation of 'Death of a naturalist' by Seamus Heaney This poem 'Death of a Naturalist' by Seamus Heaney is about the lifecycle of frogs and a child's interest in nature. As the child grows up he looses interest in all aspects of nature. It is as if 'Death of a Naturalist' was referring to the loss of innocence of the child and the love of nature he once had died inside him. Not only that, he now has respect for nature but not necessarily disliking it; nor loving it either. The atmosphere of the first stanza is quite positive. A phrase such as 'There were dragon-flies, spotted butterflies,' suggests a happy mood and refers to pleasant memories to Heaney as a child. Diction such as the 'warm thick slobber' indicates to me the child-likeness theme of this poem. Which proves that it is from an adult's perspective looking back at his childhood. Heaney has done this by using the 'child-like' vocabulary as well as a more complex and mature tone to the poem. ...read more.

Throughout the poem Heaney makes excellent use of various imagery techniques such as metaphors and similes. An example of a powerful metaphor is 'Wove a strong gauze of sound'. This is effective because 'gauze' is something we consider as being solid and in this case hits you hard. By referring to the sound to a 'gauze' it is as if we can't get away from the sound, it surrounds you. Which I think is quite fitting for a bluebottle. Another thing is that Heaney makes use of many onomatopoeic words, which makes his style so unique. I think this poem concentrates on the sounds more than any other of the senses. For example thick 'slobber' and ' coarse croaking' which is also an example of alliteration. Also I would like to comment on the use of oxymoron. The title 'Death of a Naturalist' is one example and 'gargled delicately' another. 'gargled delicately' being my favourite because Heaney turns something considered positive (the bubbles) into something far more un-pleasant. ...read more.

My response to this poem is that I enjoyed it very much. Some aspects I enjoyed more than others. When I first read the poem I could not discover much depth in it. After thoroughly reading it my thoughts changed and I realised that the poem was not all about frogs. It was a case of reading between the lines. Heaney's overall message fascinated me and urged me to delve more into the subject of 'loss of innocence'. Which set me on a train of thought. One thing in particular that made the poem more enjoyable for myself was Heaney's flair for style. The way in which he concentrates on the onomatopoeia in the poem is very effective. As I had not previously read any other of Heaney's poems this immediately drew my attention. Another thing I liked was the images he created in my mind. One of those images were (in the second stanza); a battlefield where the child is on one side and the frogs are his opposition and the frogs are invading the land-similar to a war scenario. Therefore I would highly recommend this poet simply for Heaney's unique style of writing. ...read more.