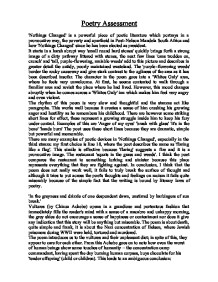 Poetry Assessment 'Nothings Changed' is a powerful piece of poetic literature which portrays in a provocative way, the poverty and apartheid in Post-Nelson Mandela South Africa and how 'Nothings Changed' since he has been elected as president. It starts in a harsh abrupt way 'small round hard stones' quickly brings forth a strong image of a dirty pathway littered with stones, the next few lines 'cans trodden on, crunch' and 'tall, purple-flowering, amiable weeds' add to this picture and describes in greater detail the untidy, poorly maintained wasteland. The 'purple-flowering weeds' border the rocky causeway and give stark contrast to the ugliness of the area as it has been described insofar. The character in the poem goes into a 'Whites Only' area, where he feels very unwelcome. At first, he seems contented to walk through a familiar area and revisit the place where he had lived. ...read more.

This simile is effective because 'flaring' suggests a fire and it is a provocative image. The restaurant 'squats in the grass and weeds'. I think the poet compares the restaurant to something lurking and sinister because this place represents everything that they are fighting against. In conclusion, I think that the poem does not really work well, it fails to truly break the surface of thought and although it tries to put across the poet's thoughts and feelings on racism it fails quite miserably because of the simple fact that the writing is bound by literary laws of poetry. 'In the greyness and drizzle of one despondent dawn, unstirred by harbingers of sun break.' Vultures (by Chinua Achebe) opens in a grandiose and portentous fashion that immediately fills the reader's mind with a sense of a macabre and unhappy morning, the grey skies do not encourage a sense of happiness or contentment nor does it give any indication that this story will be anything but miserable. ...read more.

which permits the 'perpetuity of evil' (allows it to survive, because the evil person can think himself to be not completely depraved). The poet's reasons for writing this verse are not entirely clear, unlike in 'Nothings Changed' where Tatamkhulu Afrika is writing about his own experiences from childhood and then his latter years, the Nigerian born Chinua Achebe doesn't seem to have any sort of link to the various forms of people who were "Controlled" at Nazi camps such as Belsen. In conclusion I feel that this poem is quite good at getting across whatever point it was that Chinua Achebe tried to portray, and even though it does not really stir much thought inside my own head, I'm sure there are a great deal of people who it not only touches emotionally due to their own ties with WWII but who also find it a wonderful piece of literature and story-telling. ...read more.