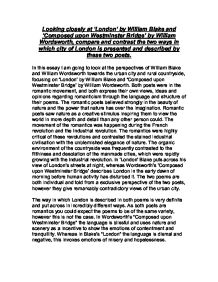 Looking closely at 'London' by William Blake and 'Composed upon Westminster Bridge' by William Wordsworth, compare and contrast the two ways in which city of London is presented and described by these two poets. In this essay I am going to look at the perspectives of William Blake and William Wordsworth towards the urban city and rural countryside, focusing on 'London' by William Blake and 'Composed upon Westminster Bridge' by William Wordsworth. Both poets were in the romantic movement, and both express their own views, ideas and opinions regarding romanticism through the language and structure of their poems. The romantic poets believed strongly in the beauty of nature and the power that nature has over the imagination. Romantic poets saw nature as a creative stimulus inspiring them to view the world in more depth and detail than any other person could. The movement of the romantics was happening during the French revolution and the Industrial revolution. The romantics were highly critical of these revolutions and contrasted the stained industrial civilisation with the unblemished elegance of nature. The organic environment of the countryside was frequently contrasted to the filthiness and desolation of the manmade cities, which were rapidly growing with the Industrial revolution. In 'London' Blake puts across his view of London's streets at night, whereas Wordsworth's 'Composed upon Westminster Bridge' describes London in the early dawn of morning before human activity has disturbed it. ...read more.

There is also alliteration in this stanza. " marks of weakness, marks of woe ". the word woe is also further emphasised by being the end word in the stanza which rhymes with the end word of the second line. In the second stanza the first three lines are started in the same way " in every ". This is done because Blake wants to show that everything is the same not just some things. Another repeated word is " cry ", this is an emphasis of what he can hear as he walks through London. He can hear the same sounds. In this stanza there is also strong metaphor " mind forged manacles ". this shows that the people of London have created their own chains, and blemished their own imperfect lives. Stanza three moves on to explain suffering in London. Blake describes the church as being " Blackened ", this could mean it is black with pollution or that the church and religion itself is black. Blake has a low opinion of the king as he describes the scene of a soldier slumped against the palace with " blood down palace walls ". Blake also uses alliteration of the letter S while describing the soldier, this is emphasis on the scene that has been written. Stanza four is enraged with emotion and corruption. ...read more.

He say's " This city now doth, like a garment wear. " This is personification also as the city can physically wear clothing. He also describes the smokeless air, a contradiction to Blake's view of the " Blackened " air. In lines nine, ten and eleven Wordsworth describes the sunrise which he can see. He describes it as if it were the most beautiful thing he had ever seen, the words the uses are passionate and loving towards the scene before him. This is again a contradiction of Blake's view towards the city. In the last lines of the poem, twelve, thirteen and fourteen, The positive view of the city rounds to a close's with a biblical reference to God, as if Wordsworth felt the scene were almost heavenly like time were standing still just so he could look at view for one more moment. Wordsworth uses the word heart as if relating the city to love and passion. In my opinion William Blake has capture the true form of the Urban London City at this time, however Wordsworth has used passion and meaning to entice the reader making the second poem more enjoyable to read. The purpose of Blake's poem was to express his anger towards the things making London so corrupt maybe to change them. The purpose of Wordsworths sonnet was to capture true natural beauty in something he was seeing from and elevated bridge, looking down on the scene. ...read more.