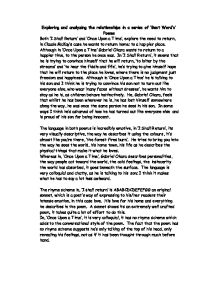 Exploring and analyzing the relationships in a series of 'Best Word's' Poems Both 'I Shall Return' and 'Once Upon a Time', explore the need to return, in Claude McKay's case he wants to return home; to a happier place. Although in 'Once Upon a Time' Gabriel Okara wants to return to a happier time, to the person he once was. In 'I Shall Return', it seems that he is trying to convince himself that he will return, 'to loiter by the streams' and 'to hear the fiddle and fife', he's trying to give himself hope that he will return to the place he loves, where there is no judgment just freedom and happiness. Although in 'Once Upon a Time' he is talking to his son and I think he is trying to convince his son not to turn out like everyone else, who wear 'many faces without dresses', he wants him to stay as he is, as children behave instinctively. He, Gabriel Okara, feels that whilst he has been wherever he is, he has lost himself somewhere along the way, he was once the same person he sees in his son. ...read more.

Shall Return' reminds me of the past when I have been really homesick and have then been reunited to the place I love. 'Once Upon a Time', reminds me of how I hate people who follow the things people do just to be accepted, like sheep. Now I will compare 'Long Distance' and 'The Sick Equation'. Both 'Long Distance' and 'Sick Equation' explore the relationships of parents through the eyes of their children. They are similar in the way that both the children are grown up and are reminiscing about their childhood. They are also similar in how their parents have shaped the writer's outlook on life and love. The obvious difference is that in, 'Long Distance', the poet is looking back over a happy marriage, so happy that the husband refused to believe the wife was gone, whereas in, 'The Sick Equation', that marriage is filled with hate and spite which causes the son to give up on love. The language in, 'Long Distance', is very informal and colloquial, this gives the poem a happier feel compared to, 'The Sick Equation', I think this is because even though he is talking about something sad, he is looking over a happy life. ...read more.

He interprets what he sees in his own style and I think he also adds a lot of his own opinions and ideas to his observations, his style is original and he is very cynical in his language. Larkin shows an extremely miserable take on ordinary, married life, as in this poem he notes multiple times that the romance has faded, that the 'honeymoon period' is over. In this poem, there is no rhyme scheme as this is like he's just writing notes as he is observing these families not like a regular poem, it may have suited rhyming as it could have been used in such a way that it could help get the writer point across more. This poem is different from the others as I have mentioned before. These poems explore the different relationships and views of relationships of families. I like the poem, 'Once upon a time' as I can relate, I used to feel like on the move from primary to secondary school, that I lost myself along the way but I then discovered a new me, so I like that poem as it is something I can understand and know how the poet was feeling. ...read more.