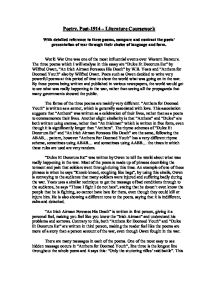 Poetry, Post-1914 - Literature Coursework With detailed reference to three poems, compare and contrast the poets' presentation of war through their choice of language and form. World War One was one of the most influential events over Western literature. The three poems which I will analyse in this essay are "Dulce Et Decorum Est" by Wilfred Owen, "An Irish Airman Foresees His Death" by W.B. Yeats and "Anthem for Doomed Youth" also by Wilfred Owen. Poets such as Owen decided to write very powerful poems at this period of time to show the world what was going on in the war. By these poems being written and published in various newspapers, the world would get to see what was really happening in the war, rather than seeing all the propaganda that many governments showed the public. The forms of the three poems are mainly very different. "Anthem for Doomed Youth" is written as a sonnet, which is generally associated with love. This association suggests that "Anthem" was written as a celebration of their lives, rather than as a poem to commemorate their lives. Another slight similarity is that "Anthem" and "Dulce" are both written using stanzas, rather than "An Irishman" which is written in free form, even though it is significantly longer than "Anthem". ...read more.

In "Dulce Et Decorum Est" the same technique is also used. This time the longest line is the second line which says "Knock-kneed, coughing like hags, we cursed through the sludge". This line is saying how the soldiers were so injured and worn out that they "cursed through the sludge" meaning it took them a long time. This is the reason why the line is so long. The longest line of "An Irish Airman Foresees His Death" does however not follow the same pattern. The first line of "Anthem" is written in the form of a rhetorical question, this question makes you think about what happened to all the people that died "like cattle" die in inhuman ways, and just being slaughtered. "Dulce" immediately starts by using a simile; "Bent double, like old beggars under sacks", this simile is showing you the extent of the injuries suffered, it made them "bent" like old people would be, not young people who should have fit and healthy bodies. "I know that I shall meet my fate" is the opening line of "An Irish Airman Foresees His Death", this immediate impact, by the man saying he is going to die is very dramatic; it engages the reader and creates suspense about what is going to happen. ...read more.

Both "Dulce Et Decorum Est" and "Anthem for Doomed Youth" describe injured servicemen in great detail. This is done because the injuries were so great that some of the soldiers had, the poets felt a 'responsibility' of telling the public what was happening. One example of this poetic device in "Anthem for Doomed Youth" is when it says; "The pallor of girls' brows shall be their pall; Their flowers the tenderness of patient minds" This is saying that there faces were the colour of a coffin cloth (white) and that they had wounded minds like a patient in hospital. One type of this imagery used in "Dulce" is when Owen says; "If you could hear, at every jolt, the blood Come gargling from the froth-corrupted lungs" This is saying that blood was spooling out of the "corrupted" lungs, making you imagine a dead or struggling soldier on the floor with blood oozing out of him. Contrary to these two poems "An Irish Airman Foresees His Death" does not describe injured soldiers; this may be because Yeats wanted to make his poem seem different to many poems which were appearing in the media at the time. After writing this essay, I have realised that different poets use different techniques to write their poems, making them appealing to different types of audiences. Katie Lebe 10W1 ...read more.