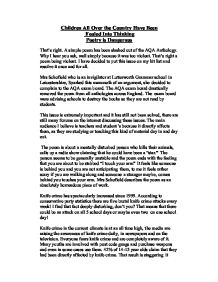 Poetry. Is the banning of Carol Ann Duffys poem &quot;education for leisure&quot; right?

Children All Over the Country Have Been Fooled Into Thinking Poetry is Dangerous That's right. A simple poem has been slashed out of the AQA Anthology. Why I hear you ask, well simply because it was too violent. That's right a poem being violent. I have decided to put this issue on my hit list and resolve it once and for all. Mrs Schofield who is an invigilator at Lutterworth Grammar school in Leicestershire, Sparked this mammoth of an argument, she decided to complain to the AQA exam board. The AQA exam board drastically removed the poem from all anthologies across England. The exam board were advising schools to destroy the books so they are not read by students. This issue is extremely important and it has still not been solved, there are still many forums on the internet discussing these issues. The main audience I believe is teachers and student's because it directly affects them, as they are studying or teaching this kind of material day in and day out. The poem is about a mentally disturbed person who kills their animals, calls up a radio show claiming that he could have been a "star." ...read more.

42% of 14-15 year olds claim that they had been directly affected by knife crime. That result is staggering it shows that nearly half a group of thirty two students have been affected by knife crime! On the internet there are many passionate teachers and students who are extremely annoyed, angry and quite fed up. They strongly feel that it was not right to ban an excellent poem. They feel that it does not make anyone want to go out and kill someone! Francis Gilbert is a head of English at his school; finds it deeply disturbing that the exam board should withdraw such an amazing poem. This poem did not carry a message to kill and it should not have been banned, it was a good poem which students could relate to as they understood the horrors of knife crime. A lot of teenagers will know that their friends, may carry knives or weapons and they may use them in a confrontation. We should not be banning poems about knife crime instead we should face the reality that knife crime does exist and we should try to stop it. ...read more.

Usually stabbings occur after arguments or fights. Throughout the poem it does not really show any kind of reason why this person wants to kill. Maybe this is Carol Ann Duffy's way of trying to preach to knife crime. She may be trying to explain and show that teenagers may just be confused and ignored or abused, and suppress there feelings and release them on someone or something. In conclusion I believe that Carol Ann Duffy's poem education for leisure is not convincing or even brainwashing people to go out and commit knife crime. I think that it is a very sophisticated and detailed poem. It has a deep message about someone who is confused or just misunderstood. I also believe that her poem is merely as violent as some of William Shakespeare's tragedies such as Macbeth, so why are they not banned? Furthermore this poem if you read deep enough does not persuade you to commit knife crime I believe it is the complete opposite. This poem was great it was a truly deep and emotional poem; I believe that it may have a slight link to knife crime but no way does this poem influence knife crime. It was an excellent poem which was banned and destroyed by AQA. ...read more.

The task here is one on Writing to Argue. The candidate demonstrates a vague understanding of the requirements of a good argument but some may call to question the validity of the argument outside extremely sensationalist media campaigns and/or the ...

The task here is one on Writing to Argue. The candidate demonstrates a vague understanding of the requirements of a good argument but some may call to question the validity of the argument outside extremely sensationalist media campaigns and/or the exam criteria. Reading it objectively, the argument appears far too dramatic to be taken seriously, even with an unbroken focus on the task set. It is important to maintain rationality when undertaking these "Writing to" tasks, as many questions can carry marks with feasibility. Naturally, statistics and such can be whipped out of the air but they also need to be rational, so claiming that "42% of 14-15 year-olds" have been affected by knife crime may be slightly sensationalist. This will by no means penalise greatly, but it is good to exercise rationality when it comes to statistics.

The candidate displays a number of techniques that are required for an effective argument - statistics, powerful language, rhetorical questions, Second Person address etc. although it would be prudent to acquire knowledge of more of these techniques, such as the voice of authority and appreciation of a counter-argument that does not contradict itself - "Knife crime in the current climate is at an all time high, the media are raising the awareness of knife crime daily, in newspapers and on the television. Everyone fears knife crime and are completely aware of it. Many youths are involved with post code gangs and purchase weapons and even in some cases use them. 42% of 14-15 year olds claim that they had been directly affected by knife crime. That result is staggering it shows that nearly half a group of thirty two students have been affected by knife crime!" This entire section does not make an argument against the banning of Carol Anne Duffy's 'Education For Leisure'; in fact all it appears to do is give ammunition to the opposing side of the argument. This should be avoided as it ruins the effectivity of the argument and does not show a good level of consistency with this paragraph in the middle of what would otherwise be a sound argument.

The Quality of Written Communication is average. I would advise not to use so many exclamation marks though. Though not hugely frequent, a maximum of one should be used, if at all, as they often give an air of immaturity or exasperation when writing the argument, and this is something that needs to be avoided because arguments are meant to be objective to some degree (hence it is a requirement that there is an appreciation of an opposing argument).