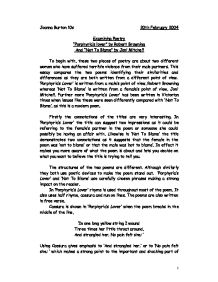 Joanna Burton 10s 20th February 2004 Examining Poetry "Porphyria's lover" by Robert Browning And "Not To Blame" by Joni Mitchell To begin with, these two pieces of poetry are about two different women who have suffered terrible violence from their male partners. This essay compares the two poems identifying their similarities and differences as they are both written from a different point of view. 'Porphyria's Lover' is written from a male's point of view, Robert Browning whereas 'Not To Blame' is written from a female's point of view, Joni Mitchell. Further more 'Porphyria's Lover' has been written in Victorian times when issues like these were seen differently compared with 'Not To Blame', as this is a modern poem. Firstly the connotations of the titles are very interesting. In 'Porphyria's Lover' the title can suggest two impressions as it could be referring to the female's partner in the poem or someone she could possibly be having an affair with. Likewise in 'Not To Blame' the title demonstrates two connotations as it suggests that the female in the poem was 'not to blame' or that the male was 'not to blame'. In effect it makes you more aware of what the poem is about and lets you decide on what you want to believe the title is trying to tell you. ...read more.

This is shown when he says, ' I warily opened her lids; again, Laughed the blue eyes without a stain.' This encourages us to think that the male character is slightly delusional, as it does not occur to him that Porphyria is dead. He calmly carries on like before looking into her eyes as if she was still alive. This is shocking to the reader; it creates disbelief making the reader want to read on. Although at the end of the poem he seems to show sense of what he has done. This is demonstrated when he says, 'And all night long we have not stirred, And yet God has not said a word.' This shows us that he understands what he has done but the connotations of God not saying a word suggest that the male character has not been punished and therefore can see no wrong in what he has done. In 'Not To Blame' the reason behind the abuse seems to be because of the male's jealousy towards the female character. We can see this when it says, 'His mother had the frailty You despise And the looks You love to drive to suicide' One interpretation could be that she received more attention than he did and that made him want to be the more dominant one within the relationship. ...read more.

Similarly there is also irony in 'Porphyria's Lover' as the male character kills Porthyria and yet holds love for her. He seems to think that it is the only way for them to stay together. A good example of this is when, 'And I, its love am gained instead! Porthyria's love: she guessed not how Her darling one wish would be heard, And thus we sit together now,' This creates mystery as the writer is trying to confuse the reader. The male character portrays his calmness and seems to believe he has won. It is also suggesting that Porthyria wanted to be with him and therefore will be forever. Overall in comparison the poems are fairly alike in their structure and they both use poetic devices to illustrate the poem. Likewise they both make good use of imagery and connotations. Although they are written in different times which is clearly shown as 'Not To Blame' is fighting for the females rights and 'Porphyria's Lover' is in some was defending the male's view on things. 'Porphyria's Lover' is different to 'Not To Blame', as it seems to be more dramatic whereas in 'Not To Blame' emphasis is more recognisable in the meaning of the poem. In conclusion these two poems hold a few similarities as well as differences. 5 1 ...read more.