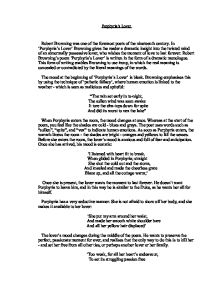 Porphyria's Lover Robert Browning was one of the foremost poets of the nineteenth century. In 'Porphyria's Lover' Browning gives the reader a dramatic insight into the twisted mind of an abnormally possessive lover, who wishes the moment of love to last forever. Robert Browning's poem 'Porphyria's Lover' is written in the form of a dramatic monologue. This form of writing enables Browning to use irony, in which the real meaning is concealed or contradicted by the literal meanings of the words. The mood at the beginning of 'Porphyria's Lover' is bleak. Browning emphasises this by using the technique of 'pathetic fallacy', where human emotion is linked to the weather - which is seen as malicious and spiteful: "The rain set early in to-night, The sullen wind was soon awake It tore the elm-tops down for spite And did its worst to vex the lake" When Porphyria enters the room, the mood changes at once. ...read more.

Porphyria has a very seductive manner. She is not afraid to show off her body, and she makes it available to her lover: 'She put my arm around her waist, And made her smooth white shoulder bare And all her yellow hair displaced' The lover's mood changes during the middle of the poem. He wants to preserve the perfect, passionate moment for ever, and realises that the only way to do this is to kill her - and set her free from all other ties, or perhaps another lover or her family. 'Too weak, for all her heart's endeavour, To set its struggling passion free From pride, and vainer ties dissever, And give herself to me forever' Robert Browning's use of the word 'worshipped' during this section of the poem is very significant, as it explains to the reader that the lover wants the respect and worship from Porphyria, in a similar manner to the way the Duke in 'My Last Duchess' wants her all-encompassing respect above everything else. ...read more.

At the end of 'Porphyria's lover', the reader is led to believe that the lover feels no remorse for his actions. In fact, he has achieved his goal in preserving the moment. This is emphasised by the last two lines in the poem, where he even says that God has not shown any anger at his actions: "And all night long we have not stirred And yet God has not said a word" In this poem the victim didn't deserve to die but the Lover have shown that human impulse can reach a point where through paranoia it is irrational and deadly. This poem is a study of insanity as there is no rational reason for the actions taken and the two men do not acknowledge any guilt behind their actions. Neither had considered the feelings of the women and acted self-centred, thinking only about what they wanted. This poem show injustice and cruelty as a result of dissatisfaction from a certain situation. ...read more.