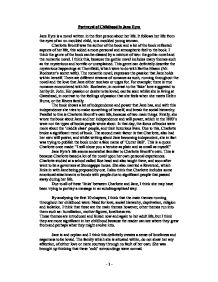 Portrayal of Childhood in Jane Eyre

Portrayal of Childhood in Jane Eyre Jane Eyre is a novel written in the first person about her life. It follows her life from the eyes of an un-moulded child, to a moulded young woman. Charlotte Bront� was the author of the book and a lot of the book reflected aspects of her life, this added a more personal and atmospheric feel to the book. I think the genre of the book can be classed by a mixture of two: the gothic novel and the romantic novel. I think this, because the gothic novel includes many themes such as the mysterious and horrific or unexplained. This genre can definitely describe the mysterious happenings at Thornfield, which were to do with Bertha Mason (Mr. Rochester's secret wife). The romantic novel, expresses the passion that Jane holds within herself. There are different streams of romance as such, running throughout the novel and the love that Jane either receives or urges for. For example: there is true romance encountered with Mr. Rochester, in contrast to the 'fake' love suggested to her by St. John. Her passion or desire to be loved, can be seen whilst she is living at Gateshead, in contrast to the feelings of passion that she feels when she meets Helen Burns, or the Rivers family. The book shows a lot of independence and power that Jane has, and with this independence she tries to make something of herself, and break the social hierarchy. Parallel to this is Charlotte Bront�'s own life, because of two main things. Firstly, she wrote the book about Jane and her independence and will power, which in the 1800's were not the types of books people wrote about. ...read more.

He is humiliating Jane, using her religion against her and isolating her from looking into Christianity for help, seeing as she is the epitome of a bad Christian in his eyes. Right from her childhood, Jane experiences a strong divide in society or mainly between herself and the family. She is constantly reminded of what position she holds in the family and I think this possibly might foreshadow Jane's rebelliousness when she falls in love with her 'master'. This is because she ignores the fact that they are 'master' and 'employee' as such, but she tries to accept them both as equal in an acceptable sense. Jane reads 'Gulliver's Travels', at the start of the novel. The fact that she is reading this specific book can signify an underlying message of the 'hierarchy', before the reader actually encounters it. This is because when Gulliver encounters the Giant, he is somewhat less than him, in strength and physique. Jane could represent Gulliver in more than one sense, seeing as she will be going on her adventure to Lowood Institution etc. and John could represent the Giant. This is a quote that John Reed (her cousin) said to her: " ...You are a dependant, mama says: you have no money; your father left you none; you ought to beg, and no to live here with gentlemen's children like us, and eat the same meals as we do, and wear clothes at mama's expense..." This shows that John, is directly informing her of her position within the household, and referring several times to quotes his mother may have used. This shows that it wasn't a childish bullying statement, but one that began from the mother. ...read more.

Even though she only briefly describes the room, she mentioned the fact that there was a "little red gallery" above her. I think this sign of red, foreshadows the hurt that she receives from Mr. Brocklehurst and the uncomfortable, poor conditions of Lowood. Bedrooms also seem an intimate and significant part of Jane's upbringing because many life changing things happen to her in them. Firstly, she is locked in the red room, which is a very significant and emotionally turning point in her life- something that she would never forget. Secondly, Helen Burns dies within the bedroom of Ms. Temple. This is very significant to Jane, because Helen was the only person that Jane truly admired and loved at that time and for her to die was definitely an unforgettable experience. Thirdly, in her adult life she experienced the near death of Mr. Rochester with the fire in his bedroom; as well as the encounter of Bertha Mason within her own. I have noticed that 'bedrooms' and the colour 'red' are two significant subjects that keep passing throughout the novel. Therefore combining the two could result in an even more dreadful or emotional scene. This does happen, within the 'Red Room', which was inevitably a very emotional and scarring event for Jane. The themes portrayed in Jane Eyre's childhood, shaped her adult life. This is because at the present, she explains vividly the events that have occurred to her and have made a significant mark in her memory. Her childhood is some what confusing and during the course of her growing up, she moulded herself into a lady who consisted of all the events and pieces of advice she gained from others. The first 10 chapters are like a process diary of the evolution from the dependant girl, to the independent woman Jane Eyre. - 1 - ...read more.