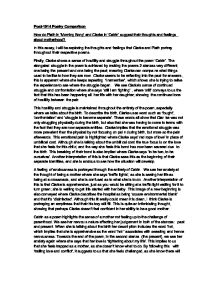 Post-1914 Poetry Comparison How do Plath in Morning Song and Clarke in Catrin suggest their thoughts and feelings about motherhood? - WJEC Eng.Lit

Post-1914 Poetry Comparison How do Plath in 'Morning Song' and Clarke in 'Catrin' suggest their thoughts and feelings about motherhood? In this essay, i will be exploring the thoughts and feelings that Clarke and Plath portray throughout their respective poems. Firstly, Clarke shows a sense of hostility and struggle throughout the poem 'Catrin'. The elongated struggle in the poem is achieved by making the poems 2 stanzas very different, one being the present and one being the past; meaning Clarke can compare what things used to be like to how they are now. Clarke seems to be reflecting into the past for answers, this is apparent where she keeps repeating 'i remember', which shows she is trying to relive the experience to see where the struggle began. We see Clarke's sense of continued struggle and confrontation where she says 'still i am fighting', where 'still' conveys to us the fact that this has been happening all her life with her daughter; showing the continued tone of hostility between the pair. This hostility and struggle is maintained throughout the entirety of the poem, especially where we talks about the birth. To describe the birth, Clarke uses word such as 'fought', 'confrontation' and 'struggle to become separate'. These words all show that Clarke was not only struggling physically during the birth, but also that she was having to come to terms with the fact that they are now separate entities. Clarke implies that the emotional struggle was more prevalent than the physical by not focusing on pain during birth, but more so the pain afterwards. This emotional pain is highlighted where Clarke says' red rope of love' in place of umbilical cord. Although she is talking about the umbilical cord the true focus is on the love that she feels for this child, and the way she feels this bond has now been severed due to the birth. This breaking of their bond is also implied where Clarke says 'to be two, to be ourselves'. ...read more.

For example, where she says 'I wake to listen', it shows that Plath is alert to hear if her baby is okay showing the anxiety she feels at the thought of her baby being hurt, but also the instinctive, protective nature that Plath has developed for her child. This instinctive character is also highlighted where Plath states 'one cry and I stumble from bed'. By saying 'stumble' it indicated that Plath had no choice in the matter, she HAD to get up, hence her grogginess. The fact she is immediately alert conveys a sense of love and protectiveness that Plath feels for her child, whether she is willing to or not. Anxiousness is also conveyed in 'Catrin' where Clarke states the room as being 'hot, white', as this shows Clarke's nervousness at being a mother, and starting a new blank history. Both of the poems show an element of protectiveness over their daughters, this is shown in 'Catrin' where Clarke says 'still I am fighting you off'. Clarke is showing her protectiveness as she wants to say no to her daughter to protect her, but also instinctively wants to keep her happy and therefore is finding it hard to say no. 'Morning Song' uses auditory imagery throughout to make us get a sense of what it might be like to be there. This is first seen where Plath describes the birth and the way midwifes 'slap' the foot soles of the newborns, which makes the reader feel a part of this very personal experience. This abrupt noise provokes the image of waking up, conveying that Plath feels as if she is waking up from a dream. The 'bald cry' of Plath's child is another abrupt noise, that makes the sound of the baby crying unpleasant, but also states it's purity and naturalness. This is achieved though the word 'bald' that shows the image of something blank, like a canvas that is yet to be drawn upon. ...read more.

For instance, in 'Morning Song' at some points Plath portrays an instinctive nurturing toward her baby 'I wake to listen', but at other points she seems distant and detached from her child: 'we stand round blankly as walls'. On the other hand, 'Catrin' shows us that Clarke feels immense amount of love for her child, 'the red rope of love', but also that she feels infuriated at some points as a mother: 'tightening about my life'. Both poems use of ambivalent emotions give the impression of the emotional strain put upon mothers, which seems to be a key theme in both 'Morning Song' and 'Catrin'. In conclusion, I think that both poems effectively portray their author's emotions and feelings about their experiences with motherhood. Both authors establish their experiences, while subtly portraying their true emotions about motherhood. Plath and Clarke make their poems easy to relate to, helping to drive home their thoughts and feelings about motherhood. Also through the structure of the poems we get an indication of how the authors feel the pace of motherhood differs. For instance, in 'Catrin' the pace of is fairly fast, but still cautious. This portrayal of Clarke's feelings about motherhood happening quickly, and her difficulty keeping up with the pace has the effect of making her emotions accessible to the reader through her opinion of the pace of motherhood, showing the anxiousness she feels toward her role. In contrast to this, Plath has a structure which uses enjambment which conveys her thoughts that motherhood is ongoing, through the 'cloud that distils the mirror'. This helps to convey her feeling that motherhood is ever-changing, and that she feels distant from her child as a consequence of this. We see the themes of ambivalence, motherhood and an onslaught of conflicting emotions from both poets. The compulsion to record their emotions suggest to us the passion they feel for their roles as mothers. From the poems we see that Clarke and Catrin convey a range of thoughts and feelings and portray their passion and emotions to the reader effectively. ...read more.