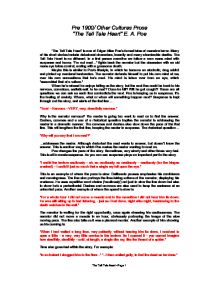 Pre 1900/ Other Cultures Prose "The Tell Tale Heart" E. A. Poe 'The Tell Tale Heart' is one of Edgar Allan Poe's famed tales of macabre terror. Many of his short stories include delusional characters, insanity and many abominable deaths. The Tell Tale Heart is no different. In a first person narrative we follow a man mans mind with suspense and horror. "I'm not mad..." fights back the narrator but the obsession with an old mans eye takes control, ending with a gruesome death. Maybe this is similar to Poe's lifestyle, in which he became an alcoholic, drug addict and picked up maniacal tendencies. The narrator defends himself to put his own mind at res, over his own accusations that he's mad. His mind is taken over from an eye, which "assembled that of a vulture." When he's relaxed he enjoys telling us the story, but the next line could be back to his nervous, conscious, s******c-self. Is he mad? Does he kill? Will he get caught? These are all questions we can ask as each line contradicts the next. ...read more.

Creating the effect that the narrator is panicking or even to emphasise something. In the following line he uses the repetition to emphasise his confidence and cunning. "I undid the lantern cautiously - oh, so cautiously - cautiously (for the hinges creaked) - I undid it just so much that a single ray fell upon the vulture eye." The narrator is also under the impression that he has planned, and now performing the perfect crime. "It grew quicker and quicker, and louder and louder every instant." The speed of the old mans heartbeat creates a traumatic experience for the narrator - affecting his mind, upsetting to him but the narrator shows us his guilt. Where Poe repeats words, the pace tends to be quicker creating a dramatic scene. As mentioned earlier the narrator seems to be a s******c character, other evidence of this: "...he had found all in vain. All in vain; because Death, in approaching him..." The repetivtive phrase, all in vain, tells us of the narrators joy at the old mans terrified state. He also used a capital 'D' in death. ...read more.

Although he may be disturbed, he is a confident, personal person, which suggests a split personality. Towards the end he reveals more information, but we're still left with questions to ask. The 'slip' of information indicates the narrator losing his confidence. Other examples include the continuous crescendo beat of the heart. The narrator finally breaks down due to the paranoia as the police come to the slaughterhouse. Suspense is produced by the array of emotions, and irrational behaviour as the unpredictable story continues. The Tell Tale Heart shows an excessive man where a vulture eye haunts him. The mysterious obsession with an old mans eye leads to a gruesome death. Then we see the narrator's s******c behaviour. The story ends with the narrator breaking down. The narrator's unpredictable feelings maintain the reader's interest and suspense. The Tell Tale Heart compels the reader to read on to find out what's happening next. The narrator experiences feelings of confidence and joy (possibly because he's s******c) on certain occasions but he can soon transform into an adjitated and anxious man. The narrator speaks with a relaxed, confident tone, which can some times turn into arrogance. As the story moves on, we witness the loss of control; he then displays irrational and sinister behaviour. The Tell Tale Heart - Page 1 ...read more.