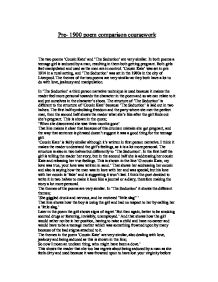 Pre- 1900 poem comparison coursework The two poems 'Cousin Kate' and 'The Seduction' are very similar. In both poems a teenage girl is seduced by a man, resulting in them both getting pregnant. Both girls feel manipulated and used as the men are in control. 'Cousin Kate' was set in pre 1914 in a rural setting, and 'The Seduction' was set in the 1980s in the city of Liverpool. The themes of the two poems are very similar as they both have a lot to do with love, jealousy and manipulation. In 'The Seduction' a third person narrative technique is used because it makes the reader feel more personal towards the character in the poem and so we can relate to it and put ourselves in the character's shoes. The structure of 'The Seduction' is different to the structure of 'Cousin Kate' because 'The Seduction' is laid out in two halves. The first half symbolising freedom and the party where she met the perfect man, then the second half shows the reader what she's like after the girl finds out she's pregnant. This is shown in the quote; 'When she discovered she was three months gone' That line makes it clear that because of this drunken mistake she got pregnant, and the way that sentence is phrased doesn't suggest it was a good thing for the teenage girl. ...read more.

It is shown there that she is referring to her son who could be the lord's only child as Kate is unable to have children. 'Your father would give his hands for one to wear his coronet'. This suggests how the lord wants a child to carry on in the family when he dies. And when he discovers Kate is baron, he might leave her for the girl, which gives her hope. The males in the poems are represented as manipulators and are using the girls. In 'Cousin Kate' it shows the male is using the girl because it says in the quote 'he wore me like a silken knot, he changed me like a glove.' That shows the male is using her when it suits him, and discards her like a piece of clothing, showing how he is in control the whole time and doesn't consider the girls feelings but only what he wants. It is very similar in 'The Seduction', although it's set in a different time period, a controlling male is still manipulating a girl. This is apparent in the line; 'He handed her the vodka, and she knocked it back like water.' ...read more.

So that's the blessing, but she has to cope with the rumors and dirty looks people give her because she is a single mother. In 'The Seduction' the girls feel a lot worse because she doesn't need a son to win back the man unlike in 'Cousin Kate.' Also she is more worried about what people would say and doesn't cope with the situation as well. This is best shown in the line; 'And better, now, to turn away, move away, fade away. Than to have the neighbors whisper that you always looked the type.' It is shown in that quote how the girl is even considering suicide just because she doesn't want to have to put up with people's whispers about her. That shows the kind of society she was living in, where if a young girl did get pregnant her life would be dedicated to the baby and she could never get a job and would be viewed as foolish and unclean. To conclude 'Cousin Kate' and 'The Seduction' are very similar because they are based around the same themes of love, jealousy, manipulation and regret. Things would be different nowadays because society has moved on from believing in Victorian morals, as there are many more single mothers in today's society so still believing in Victorian morals would be viewed as old fashioned. ...read more.