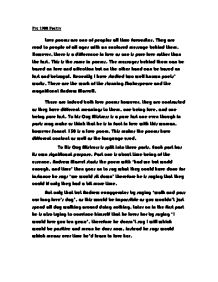 Pre 1900 Poetry Love poems are one of peoples all time favourites. They are read to people of all ages with an enclosed message behind them. However, there is a difference in love as one is pure love rather than the l**t. This is the same in poems. The messages behind them can be based on love and affection but on the other hand can be based on l**t and betrayal. Recently I have studied two well known poets' works. These are the work of the stunning Shakespeare and the magnificent Andrew Marvell. These are indeed both love poems however, they are contrasted as they have different meanings to them, one being love, and one being pure l**t. To his Coy Mistress is a pure l**t one even though in parts may make us think that he is in fact in love with this woman, however Sonnet 130 is a love poem. This makes the poems have different content as well as the language used. To His Coy Mistress is split into three parts. Each part has its own significant purpose. Part one is about time being of the essence. Andrew Marvel starts the poem with 'had we but world enough, and time' then goes on to say what they could have done for instance he says 'we would sit down' therefore he is saying that they could if only they had a bit more time. ...read more.

This also makes us think it is about l**t rather than love because why would he be bothered so much about s*x and beauty rather than valuing things like her shyness. However is also says awfully 'birds of prey' which means the only thing that is going to benefit from your body is the worms and that the time to be shy is when you are dead. It also goes back to the point of l**t when the word 'amorous' is included which means love, which must not be in the love context rather than the s****l context. In Shakespeare's poem it is simply about pure love. The one that makes you jealous, and longing that it was one included in the relationship. In this poem he says he loves her but doesn't think she's perfect. He starts off by saying 'mistress' which indicates this isn't his wife he is actually talking about. Then he starts picking faults with her beauty by saying 'coral is far more red than her lips' red' which is saying that pink is fair more red, which must means she has pale lips. Shakespeare then writes about her breast being 'snow be white, why then her breast be dun' which says she has b*****s which are dark. ...read more.

This is in fact nothing a woman would like to hear. On the other hand I think Sonnet 130 is in a quite relaxed tone as he firstly picks her faults but then concludes by saying these don't matter and he loves her whatever. To conclude all of this I preferred Sonnet 130 as I like the fact that maybe her voice gets on his nerves and her 'eyes are nothing like the sun' but he still loves her for what she is rather than just l**t like in To His Coy Mistress, where basically all he is bothered about is s*x and her beauty, not things like growing old together and valuing their time together. He also isn't lying and he values all of her faults without saying you have this wrong and this wrong, and hating her for it. I feel this is better because it shows us how we would like our partner to be, as even though the faults are there, they are cherished and loved beyond all bad things. Even though Sonnet 130 seems a lot more negative, I feel that it is better as he isn't lying like in To His Coy Mistress, and that is something we should bear in mind. ...read more.