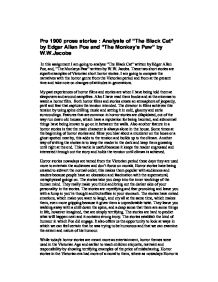 Pre 1900 prose stories : Analysis of "The Black Cat" by Edgar Allen Poe and "The Monkey's Paw" by W.W.Jacobs In this assignment I am going to analyse "The Black Cat" written by Edger Allen Poe, and, "The Monkeys Paw" written by W.W. Jacobs. These two short stories are superb examples of Victorian short horror stories. I am going to compare the narratives with the horror genre from the Victorian period and from at the present time and take note on changes of attitudes in generations. My past experiences of horror films and stories are when I have being told them at sleepovers and around campfires. Also I have read them books and at the cinemas to watch a horror film. Both horror films and stories create an atmosphere of jeopardy, peril and fear that captures the tension intended. The director in films achieves this tension by using spine chilling music and setting it in cold, gloomy and eerie surroundings. Features that are common in horror stories are dilapidated, out of the way run down old houses, which have a reputation for being haunted, and subnormal things have being known to go on in between the walls. Also another feature in a horror stories is that the main character is always alone in the house. Some times at the beginning of horror stories and films you hear about a murderer on the loose or a ghost spotted near by, this adds to the tension and builds up to the climax. Another way of writing the stories is to keep the reader in the dark and keep them guessing until right at the end. This tactic is useful because it keeps the reader engrossed and interested through out the story and holds the tension until climax is achieved. Horror stories nowadays are tamed from the Victorian period these days they are used more to entertain the audiences and don't focus on morals. ...read more.

Also it is described that the paw had a spell put on it by an old fakir to show that fate ruled people's lives. Then the sergeant told them about the man who had the paw before him that he didn't know what the first two wishes where but the third was for death. I think this was said in an attempt to scare them off. The ending to "The Monkeys Paw" is very intense because the story is left on a kind of cliffhanger just after the climax. This technique is used in many soaps so that it keeps the audience watching so that they find out the rest of the story. But in the story the cliffhanger method is used to spark the imagination of the reader. And leave the readers imagination to run wild. This is typical of a horror stories because an imagination is far more vivid and complex than a director could make a movie so the readers can make the ending up themselves. As the story of the "Black Cat" begins, the narrator is in jail awaiting his execution, which will occur on the following day, for the brutal murder of his wife. At that point, the rest of the story is told in flashback, as the narrator writes the most wild, yet homely narrative whose events have terrified--have tortured--have destroyed him. Although several characters are mentioned in this story, the true focus lies upon the nameless narrator, who is known for his docility and humanity of ...disposition. His tenderness of heart...[made him] the jest of [his] companions. He was especially fond of animals, and he was pleased to find a similar fondness for pets in his wife. They had many pets including "...birds, gold fish, a fine dog, rabbits, a small monkey, and a cat." The cat was a large, beautiful animal that was entirely black. Pluto, as he was called, was the narrator's favourite pet. ...read more.

We might argue that what the narrator calls "perverseness" is actually conscience. Guilt about his alcoholism seems to the narrator the "perverseness" which causes him to maim and kill the first cat. Guilt about those actions indirectly leads to the murder of his wife who had shown him the gallows on the second cat's breast. The disclosure of the crime, as in "The Tell-Tale Heart," is caused by a warped sense of triumph and the conscience of the murderer. The sudden appearance of the second cat from nowhere, the slow growth of the white marking, and the murder of the wife after the animal brushed against the protagonist on the stairs are touches of the supernatural What makes this story different is that Poe has added a new element to aid in evoking the dark side of the narrator, and that is the supernatural. The story has an added twist which builds tension as the narrator hopes that the reader, like himself, will be convinced that these events were not "...an ordinary succession of very natural causes and effects." In "The Black Cat" there is no real climax, The climaxes in the story appear though out the story which make it more gripping the whole way though but this makes the story not as gripping as "The Monkeys Paw" because it doesn't allow the story to collect as much tension for the final climax at the end. I think that "The black Cat" is a more gripping story because it is written in the form of a journal and makes the story seem more believable. Also what makes it more intense is that the narrator is shortly going to be executed so we know that he is not holding back from any of his actions because he is going to die anyway so it is his last chance to confess his sins and to hope to be forgiven. ...read more.