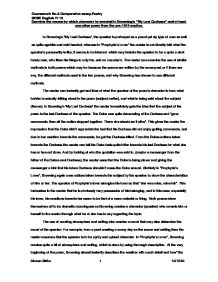 In Browning's "My Last Duchess", the speaker is portrayed as a proud yet sly type of man as well as quite egoistic and cold hearted; whereas in "Porphyria's Lover" the reader is not directly told what the speaker's personality is like, it seems to be inferred- which may include the speaker to be a quite a dark lonely man, who likes his things to only his, and no one else's. The reader can examine the use of similar methods in both poems-which may be because the poems are written by the same poet, or if there are any, the different methods used in the two poems, and why Browning has chosen to use different methods. The reader can instantly get and idea of what the speaker of the poem's character is from what he/she is actually talking about in the poem (subject matter), and what is being said about the subject (theme). In Browning's "My Last Duchess" the reader immediately gets the idea that the subject of the poem is the last Duchess of the speaker. The Duke was quite demanding of the Duchess and "gave commands; then all the smiles stopped together. ...read more.

This quotation gives the idea of a very cold, miserable and lonely atmosphere, which may reflect the mood at that moment in time of the speaker. Porphyria's lover gives the impression that he is quite cold in the sense he shows no emotion as he tells us that when his lover called him "no voice replied", he did nothing, he just sat there. In contrast to this, "My Last Duchess" portrays less of an atmosphere as there is less description present in the poem. Browning may be attempting to let the readers guess what the atmosphere is like, and let them assume for themselves. This may be because Browning may not be using the creation of setting and atmosphere as a main way to reveal character of the speaker in the poem. One assumption of the atmosphere seems to be quite tense and awkward, but again quite cold as the reader thinks about where the speaker and the character he is talking to is: a mass of empty, cold, lonely space, a mansion or castle even. In both poems, description of setting can tell the reader what the characteristics of the speaker are, but along with this aspect, the description also creates imagery. ...read more.

The speaker also uses the simile "as a shut bud that holds a bee" to describe something quite shocking. Browning probably chose this simile to show how the speaker, even though his lover was now dead, thought of his lover to still be pure and how he uses a beautiful simile to describe a disturbing event shows the reader that he still thinks of his lover as beautiful and most probably still loves her. Similarly in "My Last Duchess" the speaker uses the words "I choose never to stoop". By choosing these words, Browning has manipulated the reader into thinking that the Duke is very arrogant and is too proud to argue back, which is the case in this context. Overall, in order to obtain the different aspects of character, all of these methods had to be used by Browning. In some cases he used different methods for each poem as they were portraying a different idea or just had nothing to do with one another. But in both cases, Browning used careful thinking while also using all of these methods to make these well-structured and profound poems. Coursework No.2-Comparative essay-Poetry GCSE English Yr 10 Examine the means by which character is revealed in Browning's "My Last Duchess" and at least one other poem from the pre-1914 section. Simran Sidhu 1 10/12/04 ...read more.