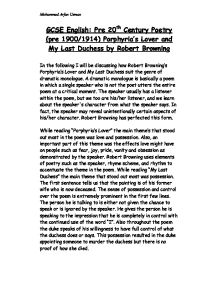 GCSE English: Pre 20th Century Poetry (pre 1900/1914) Porphyria's Lover and My Last Duchess by Robert Browning In the following I will be discussing how Robert Browning's Porphyria's Lover and My Last Duchess suit the genre of dramatic monologue. A dramatic monologue is basically a poem in which a single speaker who is not the poet utters the entire poem at a critical moment. The speaker usually has a listener within the poem, but we too are his/her listener, and we learn about the speaker's character from what the speaker says. In fact, the speaker may reveal unintentionally certain aspects of his/her character. Robert Browning has perfected this form. While reading "Porphyria's Lover" the main theme's that stood out most in the poem was love and possession. ...read more.

The sense of possession and control over the poem is extremely prominent in the first few lines. The person he is talking to is either not given the chance to speak or is ignored by the speaker. He gives the person he is speaking to the impression that he is completely in control with the continued use of the word "I". Also throughout the poem the duke speaks of his willingness to have full control of what the duchess does or says. This possession resulted in the duke appointing someone to murder the duchess but there is no proof of how she died. Both "Porphyria's Lover" and "My Last Duchess" are presented in a very much common poem arrangement. ...read more.