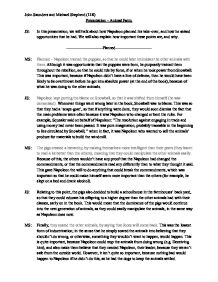 Presentation - to what extent was the revolution planned

John Saunders and Michael Shepherd (11R) Presentation - Animal Farm. JS: In this presentation, we will talk about how Napoleon planned his take-over, and how he seized opportunities that he had. We will also explain how important these points are, and why. ---------------------------Planned--------------------------- MS: Planned - Napoleon trained the puppies, so that he could later intimidate the other animals with them. Although it was opportunistic that the puppies were born, he purposely trained them throughout the rebellion, so that he could rule by force, if or when he took power from Snowball. This was important, because if Napoleon didn't have a line of defence, then he would have been likely to be overthrown before he got into absolute power (at the end of the book), because of what he was doing to the other animals. JS: Napoleon kept putting the blame on Snowball, so that it was shifted from himself (he was demonised). Whenever things went wrong later in the book, Snowball was to blame. ...read more.

MS: Finally, they scared the other animals, by saying that Jones will come back. This was the lowest form of indoctrination; in the sense that he simply scared the animals into believing that they shouldn't do wrong, or otherwise, something they wouldn't want to happen, would happen. This is quite important, because Napoleon could stop the animals from doing wrong (e.g. Deceiving him), and also make them believe that they needed Napoleon, their leader, because they weren't safe from the outside world. However, it isn't quite so important, because nothing bad would happen to Napoleon if he didn't do this, as he had the dogs to keep the animals settled. ---------------------------Opportunistic--------------------------- JS: Now for the opportunistic. Napoleon earned money, from sending Boxer to the 'knackers'. Although it could be argued that it was planned for every sick animal to be killed in this way, we think that this is opportunistic, because Boxer didn't plan to get sick any time soon (he said that he wanted to "enjoy retirement", and was taken ill soon after coming to the retiring age). ...read more.

MS: When Moses, talked of Sugarcandy Mountain, Napoleon didn't stop him from doing so. This is important, because if the animals had something good to believe in, even if it only came true after they died, the chances of them revolting would be much less, because there wouldn't be much point in revolting, if they were eventually going to be happy by living the way they were at that moment in time. JS: Overall, we think that Napoleon planned to take over the farm to a great extent, because we saw him doing odd things at the start of the book (e.g. take the dogs to act as his secret police), and we saw him gradually widen the class gaps between the pigs and dogs, and the other animals. MS: He seized his opportunities to a lesser extent, by exploiting what was happening on the farm to his advantage (e.g. earning money from Boxer being sick). However, we think he relied more upon what he planned, to ensure that by the end of the book, he had absolute power over the other animals. ...read more.