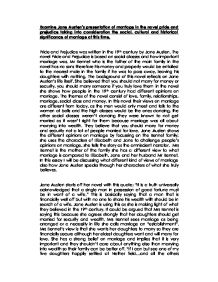 Examine Jane Austen's presentation of marriage in the novel pride and prejudice taking into consideration the social, cultural and historical significance of marriage at this time. Pride and Prejudice was written in the 19th century by Jane Austen. The novel Pride and Prejudice is based on social classes and how important marriage was. Mr Bennet who is the father of the main family in the novel has no sons therefore his money and property would be entailed to the nearest male in the family if he was to pass away, leaving his daughters with nothing. The background of this novel reflects on Jane Austen's life itself. She believed that you should not marry for money or security, you should marry someone if you truly love them in the novel she shows how people in the 19th century had different opinions on marriage. The themes of the novel consist of love, family, relationships, marriage, social class and money. In this novel their views on marriage are different from today, as the men would only meet and talk to the women at balls and the high classes would be the ones dancing, the other social classes weren't dancing they were known to not get married as it wasn't right for them because marriage was all about marrying into wealth. ...read more.

Her views on marriage are not typical of young women at this timeso when Mr Collins proposes to her she has to decline. Mr Collins starts the proposal by giving Elizabeth compliments "Almost as I entered the house I singled you out as the companion of my future life" What Mr Collin is saying is that he thinks she is women of his future and as soon as he set eyes on her he knew he would fall in love with her. Mr Collins is only proposing to Elizabeth so he can justify inheriting her house when Mr Bennet passes away, we know this because he says "As I am to inherit this estate after the death of your honoured father... I could not satisfy myself without resolving to choose a wife from among his daughters" he also says "I think it is the right thing for every clergyman... to set the example of matrimony in his parish" this means he is proposing to her to set a good example to his parish also because it would impress Lady Catherine. AND WHAT IS YOUR OPINION OF HIS REASONING In my opinion he is only proposing to Elizabeth because he has to and it is the right thing to do as he is to inherit her father's fortune. ...read more.

I am not inclined to dance" This shows Elizabeth's opinion on Mr Darcy as she didn't want to get involved with such an ignorant man. However throughout the novel we start to see a different side to both Elizabeth and Mr Darcy, they both start to show their feeling towards each other, their relationship is seen as pride and prejudice Chapter 36 portrays their true feelings towards each other. Elizabeth and Darcy's relationship differs from the majority of the relationships in the 19th century, for the reason that Mr Darcy was a rich man who was in a higher class then what Elizabeth and her family were, and it was not right for a Higher social class man to be married or even talking to a lower social class woman such as Elizabeth. As we know Darcy was not in love with Elizabeth or did not know his true feelings towards Elizabeth at first, as he would criticise her, his first impression of her is later on erased as he becomes charmed by Elizabeth and falls in love with her intelligence and inner beauty, his first impression immediately becomes replaced by affection, as this happens he is able to realise that Elizabeth is the one he wants to spend then rest of his life with and he later on proposes to her. ...read more.