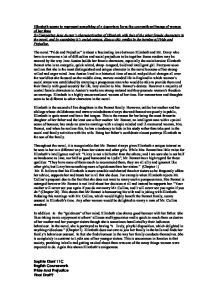 Elizabeth seems to represent something of a departure form the conventional image of women of her time By Comparing Jane Austen's characterisation of Elizabeth with that of the other female characters in the novel, and by examining it's social context, discuss this verdict in the heroine of Pride and Prejudice. The novel "Pride and Prejudice" is about a fascinating love between Elizabeth and Mr. Darcy who have to overcome a lot of difficulties and social prejudices to be together. Some readers may be amazed by the way Jane Austen builds her female characters, especially the main heroine Elizabeth Bennet who is an energetic, quick-witted, sharp- tongued, bold and intelligent girl. Everyone soon realizes that she is the most distinguished and unique character in the novel because of her strong-willed and eager mind. Jane Austen lived in a historical time of social and political changes all over the world but she focused on the middle-class, narrow-minded life in England in which women's social status was established by marrying a prosperous man who would be able to provide them and their family with good security for life, very similar to Mrs. Bennet's desires. However a majority of central female characters in Austen's works are strong-natured and they promote women's freedom on marriage. Elizabeth is a highly unconventional woman of her time. Her mannerisms and thoughts seem to be different to other characters in the novel. Elizabeth is the second of five daughters in the Bennet family. However, unlike her mother and her siblings whose childishness and narrow-mindedness always showed themselves poorly in public, Elizabeth is quite smart and has a fast tongue. This is the reason for her being the most favourite daughter of her father and the least one of her mother. ...read more.

Unlike most of the other characters in the novel and the conventional women of her time, Elizabeth is a strong woman who is capable of harmoniously balancing reason and emotion in dealing with every incident. She does and says whatever she believes to be right without paying attention to the external forces. The determination in her character really makes her become the most admired and praiseworthy woman. For example when Jane becomes ill, Elizabeth is determined to go meet her. She is also stubborn about walking there rather than taking horse and carriage. Mrs. Bennet is afraid that Elizabeth's visiting to Netherfield would make Jane recover from illness quickly and she would not stay there as long as her mother wants. Moreover, the appearance of a girl as the result of walking three miles through the mud is surely not expected to see and the girl's social image may be affected. Nevertheless, Elizabeth pays attention to nothing of it. Her only concern is Jane and her health so she does not have intention of changing her initial decision. Her answers to her parents are full of willpower and resolution. Her look "with weary ankles, dirty stockings, and a face glowing with the warmth of exercise" when arriving at Netherfield is a great surprise to the people here but she appears unworried about their comments and views on her. Nothing can make her flinch from difficulties. In a society like Elizabeth's appearance is everything and by arriving to Netherfield as she did would ruin her family's social image. However Elizabeth paid no attention to this and this shows that she is an unconventional woman of her time. She was more concerned for her sister Jane than her family's reputation. ...read more.

In "Pride and Prejudice", Jane Austen uses Elizabeth Bennet as a literary device to represent her values and attitudes on the importance of marrying for love. The heroine dares to go against the social conventions that women should marry for their economic benefits. She only weds the man she really loves and respects. This makes the young free-spirited woman differ substantially from the other female characters of the novel. Although the novel was written a vast amount of time ago and Jane Austen is no longer with us, the distance of time could not fade away the image of Elizabeth as a complex young woman with sparkling intelligence and a strong personality. Although Elizabeth makes some mistakes, for example she has been driven by her pride and prejudice for a long time leading to the misjudgements between Wickham and Mr. Mr. Darcy, the striking features she possesses still overweigh these weaknesses. She is not perfect but is an idealized woman. That is possibly the message Jane Austen was trying to get across, that there is no perfect woman, but then who is. In modern times, Elizabeth would be the opposite of unconventional. Now women are free to express their opinions and are encourage speaking their minds. In this way I think Jane Austen has predicted the future of women through Elizabeth. I believe Jane Austen has been accurate in her prediction and she has succeeded in producing more Elizabeth's' throughout the world. I admire Elizabeth Bennet and I believe that she is an ideal women. Particularly when it comes to her strength of mind and her courage. ?? ?? ?? ?? Sophie Kiani 11C English Coursework Pride And Prejudice Final Draft? ...read more.