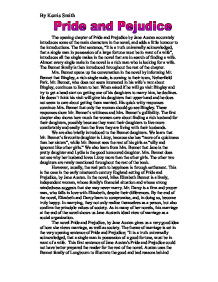 Pride and Prejudice by Jane Austen

The opening chapter of Pride and Prejudice by Jane Austen accurately introduces some of the main characters in the novel, and adds a little humour to the introductions. The first sentence, "It is a truth universally acknowledged, that a single man in possession of a large fortune must be in want of a wife", introduces all the single males in the novel that are in search of finding a wife. Almost every single male in the novel is a rich man who is looking for a wife. The Bennet family is then introduced throughout the rest of the chapter. Mrs. Bennet opens up the conversation in the novel by informing Mr. Bennet that Bingley, a rich single male, is coming to their town, Netherfield Park. Mr. Bennet, who does not seem interested in his wife's rant about Bingley, continues to listen to her. When asked if he will go visit Bingley and try to get a head start on getting one of his daughters to marry him, he declines. He doesn't think his visit will give his daughters that upper hand and he does not seem to care about getting them married. His quick witty responses convince Mrs. Bennet that only the women should go see Bingley. These responses show Mr. Bennet's wittiness and Mrs. ...read more.

This couple shows that you should marry someone who feels the same towards you or eventually you will be unhappy. The marriages of the two eldest Bennet daughters were pleasant and appear to be ideal. Jane had longed for Mr. Bingley for quite a while. Bingley was handsome, rich, kind, and well liked. He and Jane shared many conversations and had complimentary personalities. They were pleasantly matched and I believe that they shared a happy life together. Elizabeth and Darcy's marriage was an excellent match. They were equal in intellect, had physical attraction and deep love for one another, financial security, romance, and friendship. They are the two I believe would be most happy in life. Austen wanted the reader to know that marriage should be approached as a package deal - a package of love, financial stability, physical attraction, and happiness. The characters in Jane Austen's Pride and Prejudice are not all miserable by the end of the novel. Happy marriages in Austen's novels do occur. The right people eventually come together, for example, Elizabeth and Darcy, the hero and heroine. The development of the relationship between Elizabeth and Darcy is the most important proof of the whole overall theme of compromise. This relationship took work, it did not just occur. Elizabeth has to learn to control her prejudices. ...read more.

As said before, the movement of the novel is towards compromise. Through marriage, Elizabeth and Darcy are making the ultimate compromise. They are both changing a little about themselves, so that their marriage can be successful. Had the novel ended without marriage, then the realizations on both Elizabeth, and Darcy's behalf would have been for nothing. Also, through the novel we see that Jane Austen is using marriage as a way of representing society. An ideal marriage is representative of an ideal society. If people used the same methods as a couple would use to obtain an ideal marriage, then perhaps we would be able to obtain an ideal society. By researching Jane Austen we know that most of the heroes and heroines end up at the end of the story in an ideal marriage. By having Darcy and Elizabeth end the novel engaged in an ideal marriage is a significant detail. Jane Austen, in doing this is suggesting that society would be better if it followed Elizabeth and Darcy's example. By controlling pride and prejudice, and by learning that compromise is sometimes the best way to happiness, society can hope to improve itself. Marriage in the end is the perfect ending, since it is both an affirmation of the values of society as well as a personal fulfilment, which it is for both Elizabeth and Darcy since they improve themselves by being together. ?? ?? ?? ?? By Kerris Smith ...read more.