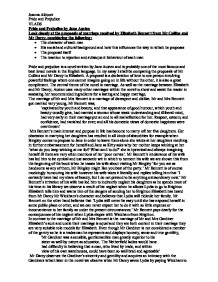 Pride and Prejudice by Jane Austen

Pride and Prejudice by Jane Austen Look closely at the proposals of marriage received by Elizabeth Bennett from Mr Collins and Mr Darcy, considering the following: * The character of each man * His social and cultural background and how this influences the way in which he proposes * The proposal itself * The reaction to rejection and subsequent behaviour of each man Pride and prejudice is a novel written by Jane Austen and is probably one of the most famous and best loved novels in the English language. In my essay I shall be comparing the proposals of Mr Collins and Mr Darcy to Elizabeth. A proposal is a declaration of love to one person involving powerful feelings where one cannot imagine going on in life without the other, it is also a great compliment. The central theme of the novel is marriage. As well as the marriage between Elizabeth and Mr Darcy; Austen uses many other marriages within the novel to show and assist the reader in assessing her recommended ingredients for a lasting and happy marriage. The marriage of Mr and Mrs Bennett is a marriage of disrespect and dislike. Mr and Mrs Bennett got married very young, Mr Bennett was; 'captivated by youth and beauty, and that appearance of good humour, which youth and beauty usually give, had married a woman whose weak understanding and illiberal mind, had very early in their marriage put an end to all real affection for her. Respect, esteem, and confidence, had vanished for ever; and all his domestic views of domestic happiness were overthrown' Mrs Bennett's main interest and purpose in life has become to marry off her five daughters. Her obsession in marrying her daughters has resulted in all kinds of absurdities for example when Bingley comes to propose to Jane in order to leave them alone she winks at her daughters resulting in further embarrassment for herself and Jane as Kitty asks why her mother keeps winking at her 'what do you keep winking at me for? ...read more.

Mr Collins begins the letter by referring to a past argument between Mr Bennett and his father and tells Mr Bennett that he was in two minds whether to contact him as 'fearing lest it might seem disrespectful to his memory for me to be on good terms with any one, with whom it had always pleased him to be at variance' Mr Collins explains that he writes the letter to 'heal the breach', make peace with the Bennetts. Mr Collins true reasons for making peace with the Bennett family is that he has been told to get married by his patroness Lady Catherine de Bourgh he hints and refers to marrying one of Mr Bennett's daughters in the letter 'I cannot be otherwise than concerned at being injuring your amiable daughters, and beg leave to apologise for it, as well as to assure you of my readiness to make them every possible amends,' the 'possible amends' Mr Collins is referring to is the marriage to one of his five cousins. The letter shows Mr Collins to be very arrogant and self-important as he talks in great boring detail about himself and him patroness Lady Catherine de Bourgh QUOTE we also observe his pomposity at the Netherfield ball when he informally introduces himself to Mr Darcy. This was considered a breach of etiquette in polite society to enter into a conversation, especially with someone of superior rank, as Mr Darcy, without a formal introduction. Mr Collins believes that it is a compliment to Mr Darcy's aunt by assuring Mr Darcy that his aunt 'was quite well yesterday se'nnight' Mr Collins tells Elizabeth who tries to discourage him and save him from the embarrassment that 'I consider myself more fitted by education and habitual study to decide on what is right than a young lady like yourself.' The way in which Mr Collins speaks to Elizabeth is condescending and patronizing he himself is ignorant he does not even take into consideration or think about what ...read more.

wish to see Mr Collins, Charlotte herself picks up on this and says 'My dear Eliza he must be in love with you, or he would never have called on us in this familiar way'. Mr Darcy's increasing infatuation and love for Elizabeth grow until he finally proposes. Elizabeth who feels to unwell to attend Rosings in the evening as she has heard from Colonel Fitzwilliam of how Mr Darcy has saved Mr Bingley from a 'most imprudent marriage' the marriage Colonel Fitzwilliam is oblivious to, to Jane. Elizabeth is angry and feels indignant that Mr Darcy pride and arrogance have destroyed her sister's happiness. Mr Darcy finds Elizabeth alone From other marriages within the novel we can see that Elizabeth and Mr Darcy will have a strong marriage even though their backgrounds and wealth are not suited they are so far equal as Elizabeth tells Lady Catherine who comes to Longbourn Elizabeth later on to make sure if Elizabeth and Mr Darcy are engaged, Lady Catherine insults Elizabeth telling her that she is 'a young woman without family, connections, or fortune. Is this to be endured! But it must not, shall not be. If you were sensible of your own good, you would not wish to quit the sphere, in which you have been brought up' Lady Catherine is insulting Elizabeth by telling her that she would not wish to quit the sphere in which she had been brought up she is being arrogant and obnoxious as far as Elizabeth is concerned they are in the same 'sphere' 'He is a gentleman; I am a gentleman's daughter; so far we are equal.' Lady Catherine asks who are 'your uncles and aunts? Do not imagine me ignorant of their condition' this is an ironic statement as yes her uncle Gardiner is in trade but yet he has a certain intimacy and friendship with Mr Darcy who later 'rejects' his aunt proving that connections and wealth is irrelevant . Joanna Aldoori Pride and Prejudice VLADS ...read more.