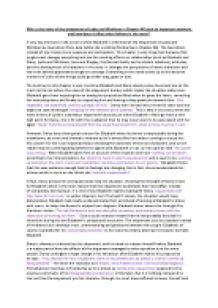 Pride And Prejudice:Why is the news of the elopement of Lydia and Wickham in Chapter 46 such an important moment and how does it affect what follows in the novel?

﻿Why is the news of the elopement of Lydia and Wickham in Chapter 46 such an important moment and how does it affect what follows in the novel? A very key moment in the novel is when Elizabeth is informed of the elopement of Lydia and Wickham by two letters from Jane (while she is visiting Pemberley in Chapter 46). The two letters instead of one create more suspense and anticipation. This chapter is very important because that single event changes everything and has far reaching effects on relationships (such as Elizabeth and Darcy, Lydia and Wickham, Jane and Bingley, the Bennet family and its distant relations), attitudes, and the development of characters in the story. It changes the perspective of many characters and the truth behind appearances begins to emerge. Everything in the novel builds up to this decisive moment of crisis where things could go either way; good or bad. The build up to this chapter is very crucial as Elizabeth and Darcy slowly come closer and are on the most civil terms before the news of the elopement breaks, which makes the situation sadly ironic. Elizabeth goes from rejecting him to having her prejudices lifted when he gives the letter, correcting her misconceptions and finally to respecting him and having a deep gratitude towards him: ?She respected, she esteemed, she was grateful to him.? Darcy even invites her to meet his sister and she begins to start thinking of ?bringing on the renewal of his address.? This is why it?s so ironic ...read more.

In fact, in Jane?s letter, Denny says that Wickham ?never intended to go there, or to marry Lydia at all? (?there? in this context meaning Gretna Green: a place where young couples got married). Lydia did believe she was going to get married, as Elizabeth thinks: ?She did not suppose Lydia to be deliberately engaging in an elopement, without the intention of marriage?. But there was enough evidence to suggest that her little understanding would be her downfall: ?neither her virtue nor her understanding would preserve her from falling an easy prey?. She definitely didn?t understand the repercussions of this scandalous affair and doesn?t seem to full grasp the meaning of a woman?s honour; something that was very important in the 19th century. As Mary says in her reflections: ??Loss of virtue in a female is irretrievable- that one false step involves her in endless ruin??. Thankfully, the couple end up getting married due to a payment of ?considerably more than a thousand pounds? by Darcy but their characters seem the least affected by the whole incident. ??Lydia was Lydia still; untamed, unabashed, wild, noisy and fearless.?? Lydia undergoes no change and thinks that ??my sisters must all envy me??. She has absolutely no shame for her behaviour and instead, she continuously flaunts her married status around at every opportunity available: ??Ah! Jane, I take your place now, and you must go lower, because I am a married woman.?? But, she doesn?t take the responsibilities that come with her married status very seriously. ...read more.

your sight, or allow their names to be mentioned in your hearing.? For Lady Catherine, however, the Bennet?s disgrace is a weapon as she tries to use it against Elizabeth, in warning her to keep off Mr Darcy since she hears of their relationship: ??I am no stranger to the particulars of your youngest sister?s infamous elopement?Are the shades of Pemberley to be thus polluted??? Ironically, it has the inverse effect and her visit becomes the means of uniting Elizabeth and Darcy, as Elizabeth?s reluctance to rejecting him, gives him new encouragement: ??It taught me to hope?had you been absolutely, irrevocably decided against me, you would have acknowledged it to Lady Catherine, frankly and openly.?? In conclusion, the importance of the elopement is only truly understood after experiencing the aftermath, as the immediate effects and late effects of the elopement vary greatly for most people. It also has a different effect on different characters. For Elizabeth and Darcy, and Jane and Bingley, it is like a blessing in disguise but for Mr and Mrs Bennet, and Lydia and Wickham, it fails to have any good effect on the situation or characters. Instead, it reveals their flaws to others. This is the same for Mr Collins as he is shown as unforgiving of the disgrace extended to his household, and Lady Catherine?s insolent side is unveiled. The elopement changes the whole story and most characters revel in the change, thanks to Mr Darcy, with exceptions such as Lady Catherine and Miss Bingley. Total words in quotes: 713 ...read more.

This is an excellent essay indeed, with very few faults. The analysis is conducted with precision and close referencing from the text. Quotations are aptly chosen and integrated smoothly into the flow of the essay.

Paragraphing and sentence control are generally very good, with few slips, and lexis is excellent. Technical language of literary analysis is used skillfully and appropriately.